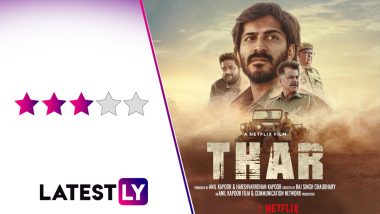 Thar Movie Review: It is a coincidence that the two major Indian movie releases on OTT this week - Saani Kaayidham and Thar - have the same common themes. They both are set in the '80s, are about brutal bloody revenge, they are both beautifully framed despite the gory content, both deal with sexual assaults and they both are stuck in a predictable screenplay. And if you end up watching Saani Kaayidham and Thar back to back, like I did, then be prepared to have some very grisly nightmares. Oh wait, even Marvel came out with their scariest film this week. Wait, what's going on this week? OTT Releases of the Week: Anil Kapoor’s Thar on Netflix, Anson Mount’s Star Trek Strange New Worlds on Voot Select, Keerthy Suresh’s Saani Kaayidham on Amazon Prime Video and More.

Thar is the second directorial of actor Raj Singh Chaudhary, known for playing the lead in Anurag Kashyap's Gulaal. Kashyap had written the dialogues for Thar. The movie unites Anil Kapoor and son Harsh Varrdhan Kapoor, with the senior Kapoor also producing the film. Other notable actors in the movie are Satish Kaushik, Fatima Sana Shaikh, Mukti Mohan, Jitendra Joshi and Nivedita Bhattacharya.

Thar is set in the '80s in a village called Munabbao in Rajasthan, that suddenly sees a spurt in killings. A group of dacoits has killed the parents of a house where a wedding was about to happen. Meanwhile the police finds a mutilated dead body hanging from a tree. Anil Kapoor is Inspector Surekha Singh, the resident Sheriff Ed Tom Bell of the sleepy village, caught in the sudden whirlwind of crimes, as he and his subordinate Bhure (Satish Kaushik) try to figure out if there are any connection between the killings.

Raj Singh Chaudhary has crafted Thar like a spaghetti western, like those Clint Eastwood movies where Eastwood trots into a town with his horse, a stranger to the inhabitants there but has an agenda of his own. For Thar, Harsh Varrdhan Kapoor's character becomes The Man With No Name, only that he has a name Siddharth and the horse becomes his jeep. The connection between the stranger and the killings are defined later on, as he seeks out one of his targets Panna (Jitendra Joshi) in the village, while seducing his abused wife Kesar (Fatima Sana Shaikh).

I was in love with how lucidly Thar has been photographed. There are some beautiful wide frames of the locales that are definitely eye-striking (cinematography: Shreya Dev Dube). In the opening credits, there's an eagle's eye view of the place with an actual eagle in the frame. That's some camera-meta there! These frames and the striking locales help Thar in getting an exquisite identity for itself.

Raj Singh Chaudhary also does a neat job of setting up the plot and the characters. The first half of Thar is intriguing enough. I was invested in the film's western setting, in Siddharth's bloody mission and in Surekha Singh's investigation as he handles murders and a a cross-border opium smuggling trade, and for once, finds a renewed interest in his work. The western elements with a touch of  noir definitely work here. There is some very disturbing torture and killing scenes, that are not easy to watch. But Thar doesn't overdo the gory elements for the sake of sensationalism. Saani Kaayidham Movie Review: Keerthy Suresh and Selvaraghavan's Powerful Performances Command Arun Matheswaran's Gory But Okayish Revenge Drama.

The director also occasionally played with expectations here. There was a scene where I expected a certain supporting character to bite the dust, the way it is build up with the use of camera and a lack of BG score. That doesn't happen though, then but the movie then suddenly drops that death when you least expect it.

It is the second half of Thar, that I found to be underwhelming, and that has more to do with how predictable the screenplay has turned out to be. When you can guess the motives and the reasoning, Thar offers no further surprises as it trudges to a violent climax that ties up both the strands of the film in a not so smooth manner. Also, I believe our commercial cinema shouldn't overexplain stuff and trust the viewers to figure out things on their own, a problem that Thar does with its flashback scenes.

As for the performances, Anil Kapoor is, as always, solid, as the fatigued cop trying to handle a situation that threatens to beyond his grasp. His performances steadies the film when it has the tendency to slip from the rails As an actor, Harsh Varrdhan Kapoor is still improving (he was quite the hoot in AK vs AK), but the way he is used for his stony-faced character tackles the limitations and thereby manage to create a mysterious persona. I also have to give it to him to take up all unconventional films to be a part of, even if they produced mixed results.

Fatima Sana Shaikh (her character felt under-written, though), Mukti Mohan, Jitendra Joshi, Sanjay Bishnoi, Satish Kaushik are all good in their roles. Gave some nostalgia to see Kapoor and Kaushik pair up on screen once again, though their previous collaborations didn't see Mr Kapoor utter some choice abuses!

- Violent Scenes are Not Easy to Watch (but not overdone)

Thar works well as a tribute to the Western genre but still manages to synchronise itself to the Indian setting with a dynamic ambience and ends up being a bloody vendetta saga that's worth a watch. If the screenplay wasn't so predictable, my rating would have gone up a bit more. Thar is streaming on Netflix.

(The above story first appeared on LatestLY on May 06, 2022 03:47 PM IST. For more news and updates on politics, world, sports, entertainment and lifestyle, log on to our website latestly.com).