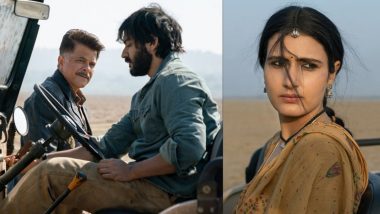 The much-awaited film Thar starring Anil Kapoor, Harsh Varrdhan Kapoor and Fatima Sana Shaikh has finally released on Netflix today (May 6). Directed by Raj Singh Chaudhary, the flick revolves around a man who moves to a big town to seek a job and to avenge his past. Well now, reviews of Thar are already out and critics are loving the dark and mysterious drama. Also, a few moviegoers have admired Satish Kaushik and AK's performances in the film. Here, check out the review round-up of the crime-thriller below. Thar Movie Review: Anil Kapoor and Harsh Varrdhan Kapoor’s Netflix Film Works for Its Noirish Western Elements Despite Predictable Screenplay (LatestLY Exclusive).

The Indian Express: "The best performance comes from Satish Kaushik: as the lower caste cop whose uniform is a shield in more ways than one, Bhure is one with the ‘thar’. This is where he came from, and this is where he goes."

Firstpost: "The cast has many impressive talents but none quite as arresting as Anil Kapoor whose innate appeal seems to increase with each passing year. As the weatherbeaten officer who is far smarter than his rank would suggest, he keeps Thar going even when its writing enters shallow waters." OTT Releases of the Week: Anil Kapoor’s Thar on Netflix, Anson Mount’s Star Trek Strange New Worlds on Voot Select, Keerthy Suresh’s Saani Kaayidham on Amazon Prime Video and More.

NDTV: "Thar, a film with dialogues by Anurag Kashyap, has a few sharp edges, but it promises much more than it actually delivers. Vengeance, says a character, is a double-edged sword. In Thar, it has the feel of a mirage. It is bloody all right, but is far too pale to knock us out of our wits."

The Guardian: "This is a stomach-turningly violent movie, and Inspector Singh isn’t above using beatings to get answers to his questions. There is a very impressive action sequence involving a Land Rover flying through the air. In the end, I felt the explanation for the violence was a little glib, but this is a film made with gusto and style."

(The above story first appeared on LatestLY on May 06, 2022 04:25 PM IST. For more news and updates on politics, world, sports, entertainment and lifestyle, log on to our website latestly.com).