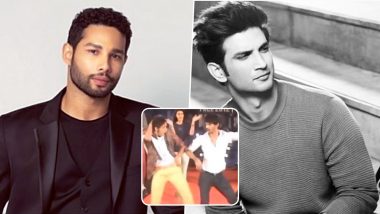 It has been two months since Sushant Singh Rajput left the moral word. The memories of the actor will remain etched in our hearts forever. Siddhant Chaturvedi is one of us. In fact, the Gully Boy actor has a special connection with Sushant. When Siddhant won a pageant that opened doors for him, it was Sushant Singh Rajput who was the chief guest at the event. At one point, Sushant joined Siddhant on the state and both the handsome actors danced to the sultry tunes of Katrina Kaif's song, "Chikni Chameli". Sushant Singh Rajput Case: Late Actor’s Sister Shweta Singh Kirti Demands CBI Enquiry from PM Narendra Modi and HM Amit Shah (Watch Video).

Siddhant shared the video of this precious moment on his Instagram page. We are absolutely going gaga over Sushant ke thumke. In his post, Siddhant revealed that it was Sushant who announced his name as the winner. He added that it was this very win that convinced his parents to let him pursue his dream of becoming an actor. Siddhant contemplated a lot before finally making up his mind to share the dance  video on Insta. Siddhant Chaturvedi Opens Up About Sharing Screen Space with Katrina Kaif and Deepika Padukone.

Sushant died by suicide on June 14. The fans, friends and family members of the actor are campaigning for a CBI inquiry.

(The above story first appeared on LatestLY on Aug 13, 2020 10:47 PM IST. For more news and updates on politics, world, sports, entertainment and lifestyle, log on to our website latestly.com).