Unlike Taimur Ali Khan, Misha Kapoor is ‘Not to Be Clicked’ – Neelima Azeem Gets FIERCELY Protective About Her Grandchild – Watch Video

With the spotlight on starkids, it has become a norm to papp them anywhere and everywhere! 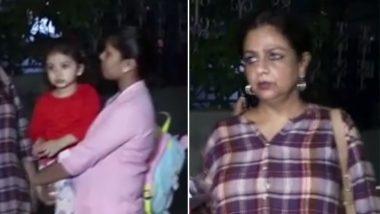 With the spotlight on starkids, it has become a norm to papp them anywhere and everywhere! Following the starkids everywhere and closely monitoring their every move can have its own perils and we are all very well aware of it. It is just not very normal and healthy environment for the kid to grow- up in. While on one hand we have parents like Kareena Kapoor and Saif Ali Khan, who are super cool and chilled out when it comes to their munchkin Taimur Ali Khan being in the media glare, on the other, we have another starkid- Misha Kapoor, whose family members aren't okay with the shutterbugs clicking her.  Recently, when Misha made an appearance with her grandmom Neelima Azeem, the paparazzi started taking pictures of the child. Neelima immediately stood in front of Misha, protecting her from the cameras, asking the lensemen to step back. "She is not to be clicked," said Neelima as she got fiercely protective about Misha. The paparazzi then clicked a few photos of Neelima and that was that. Kareena Kapoor on Taimur Ali Khan Dolls: People Should Understand That He’s Just a Two-Year-Old Child and Needs a Normal Life.

Watch the video below-

Everyone deserves a normal childhood - whether it is Misha or Taimur. Having said that, recently, Shah Rukh Khan's son AbRam was spotted leaving Aaradhya's birthday party where he creamed "No pictures" and the papps continued to click him. That obviously made him feel uncomfortable and it was wrong on so many levels for the cameramen to click him despite him say a straightforward no. AbRam Shouts ‘No Pictures’ As He Gets Nervous Upon Seeing Media Frenzy Outside Aaradhya Bachchan’s Birthday Bash - Watch Video.

It is understandable that when you are a celebrity, along with you, your family members are also continuously under the spotlight. To an extent clicking pics of the starkids is also fine, in my personal opinion, but it cannot go to an extent where the paparazzi follows them everywhere!

(The above story first appeared on LatestLY on Nov 21, 2018 10:50 AM IST. For more news and updates on politics, world, sports, entertainment and lifestyle, log on to our website latestly.com).