Amul's old ad of Urmila Matondkar from 1995 went viral claiming to a new one. Many users on Twitter bust this myth and revealed how it has nothing to do with Kangana Ranaut and Urmila's spat 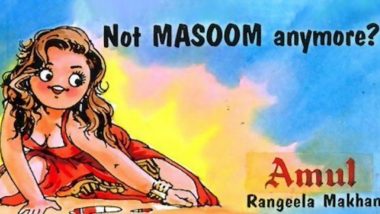 Systemic trolling on social media has become a menace. These people on Twitter make it their life's mission to dig up old stuff and try to pass it off as a current phenomenon. The Kangana Ranaut-Urmila Matondkar controversy has divided everyone. On Kangana's incessant drug use in Bollywood rant on Twitter, Urmila had responded saying she should also talk about the same problem in her state. To this Kangan made an irresponsible remark calling Urmila a soft porn star. Now an old Amul ad is being circulated on social media. This ad dates back to 1995, the year Rangeela released.  Urmila Matondkar Joins the Nepotism Debate in the Industry, Says She Was Discriminated Against More by the Media than Film Fraternity

Many on Twitter slammed people spreading this rumour by correcting their mistake. Back in 1995, this was Amul's way of saying how the child artist from Masoom has grown up to become an adult in Rangeela.

This is a highly misleading tweet, trying to frame a 1995 (yes *1-9-9-5*, the year Rangeela released) ad by Amul as a 2020 ad. Amul has nothing to do with the current KR-UM slugfest. You can only hold them responsible for the Sudarshan TV nonsense. https://t.co/DbmUyD1Wyz pic.twitter.com/PN8NbxhvQK

For context, in 1995, Amul used that headline to signify that the star who featured in Masoom (the film) as a child star, is "not Masoom" anymore. It is the typical Amul-Da Cunha style wordplay and works very well within that context... in *1995*.

Even Anurag Kashyap spoke up against it

If I am Not mistaken , this came out when “Rangeela” released and not now. And it was based on the fact that Urmila was the child actor in “Masoom”. It was meant to be an appreciation . Now misused by trolls after the current scenario.

Hopefully, now all the misgivings and misunderstandings have been cleared.

(The above story first appeared on LatestLY on Sep 18, 2020 04:53 PM IST. For more news and updates on politics, world, sports, entertainment and lifestyle, log on to our website latestly.com).