It has been more than 16 years since Katrina Kaif has been a part of the industry. She is looked up not just for her roles but for her sartorial choices too. Whether onscreen or off screen, Katrina’s style has always grabbed eyeballs. 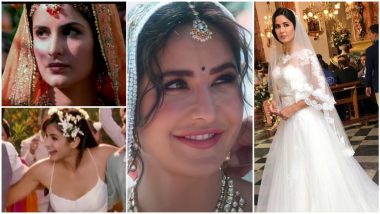 Katrina Kaif and Vicky Kaushal are not just the most sought-after actors of Bollywood, but they have fans worldwide. The two have won hearts with their works in the world of cinema. Ever since rumours of them being in a relationship started doing rounds, fans are extremely happy for the two and have been waiting for them to take their relationship to the next level and it is finally happening. Katrina Kaif is all set to marry her beau Vicky Kaushal on December 9. It is going to be a grand affair that would be taking place at the Six Senses Fort Barwara in Rajasthan. Katrina Kaif Poses for the Paparazzi in an Elegant White Saree As She Reaches Vicky Kaushal’s Residence for Pre-Wedding Rituals.

As the big day nears, fans of VicKat (as fans fondly call the couple) are curious to know what Vicky Kaushal’s ladylove Katrina Kaif would be wearing for the pre-wedding festivities and on the wedding day. The buzz is rife that the ceremonies would take place as per Hindu traditions and there would be a white wedding too. As everyone awaits to know and see how Katrina would be looking as a bride in real, let’s look how she left everyone mesmerised with her bridal avatars in reel.

It has been more than 16 years since Katrina Kaif has been a part of the industry. She is looked up not just for her roles but for her sartorial choices too. Whether onscreen or off screen, Katrina’s style has always grabbed eyeballs. From wearing traditional lehengas to white gowns in films, she has been an inspiration when it comes to bridal looks. Ahead of Katrina’s grand wedding with Vicky Kaushal, let’s check out her bridal looks in films that left us all absolutely awe-struck. Katrina Kaif Shares Stunning Pictures of Herself in a White Gown With a Thigh-High Slit in a Beach! 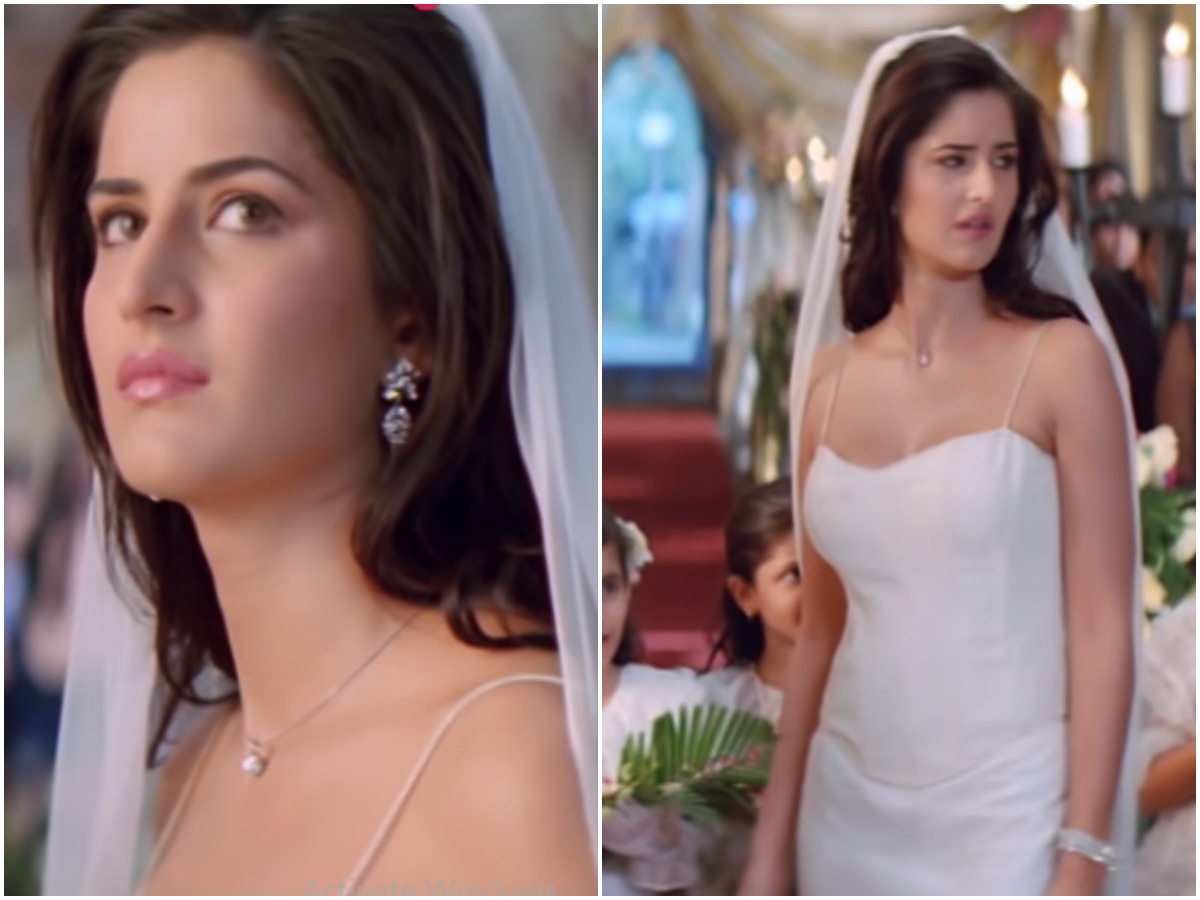 Be it reel or real, Katrina Kaif has always maintained a chic and elegant look. The actress who shared screen space with Salman Khan in the film, walked down the aisle in a white strappy gown and a simple veil over her head. She accessorised her outfit with simple jewels, left her hair open and the minimal makeup gave a perfect Christian bride look. 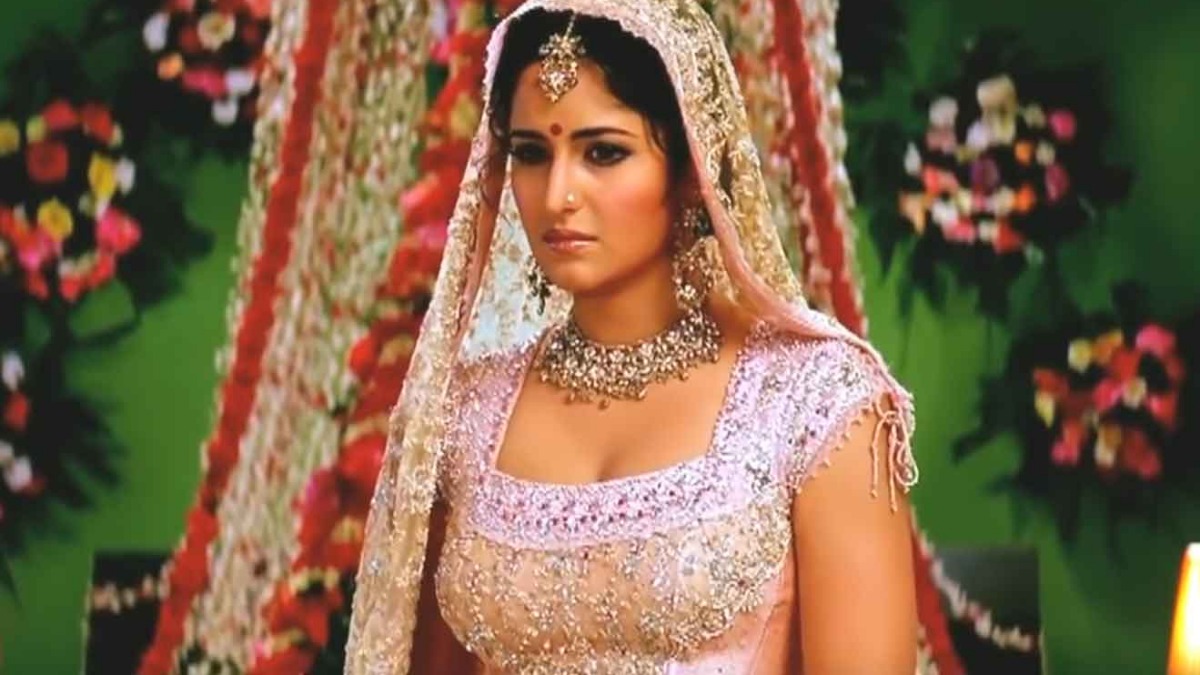 It was a heavily embellished baby pink coloured lehnga and matching corset top that Katrina Kaif had donned. The actress carried the outfit with absolute grace. The red bindi on her forehead, kohled-eyes and traditional jewelleries gave her a complete different look. 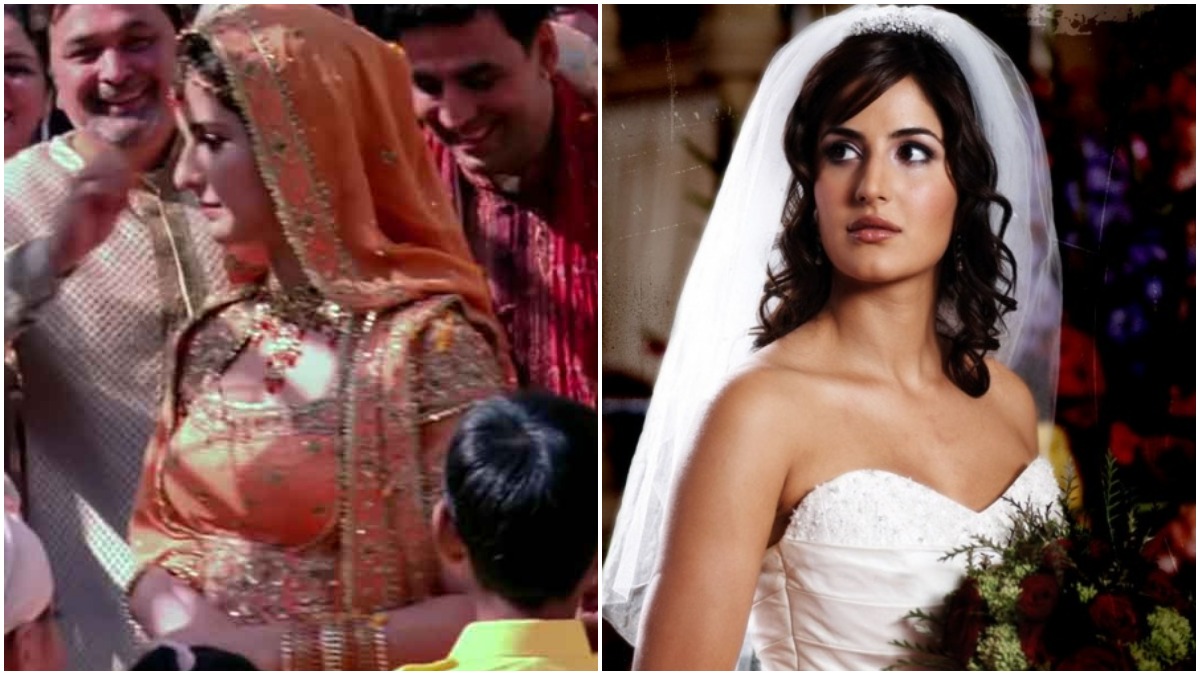 We saw Katrina Kaif in two different bridal avatars. For the Hindu wedding, she was seen in an orange coloured outfit with gold sequins work and she completed her look with matching jewels. For the white wedding, she looked stunning in a princess gown that had sweetheart neckline. 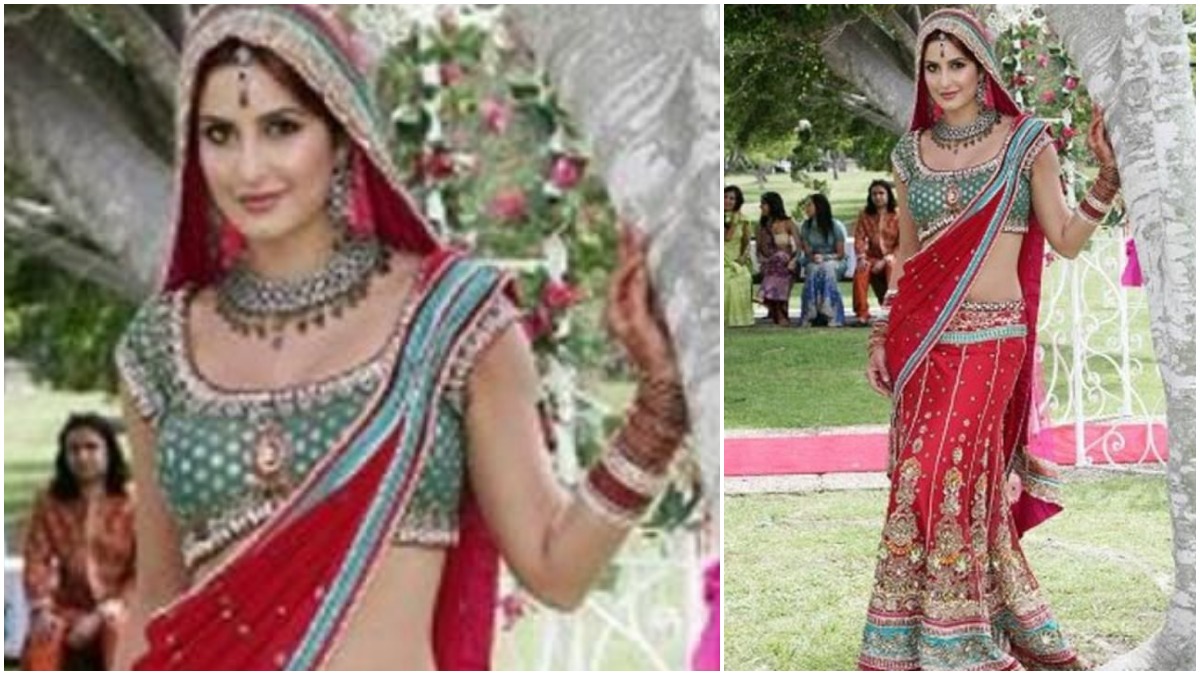 The actress’ lehenga-choli combo in the film left everyone stunned. The magenta-pink coloured lehenga was heavily embellished, whereas the green choli and the dupatta had silver sequins work. 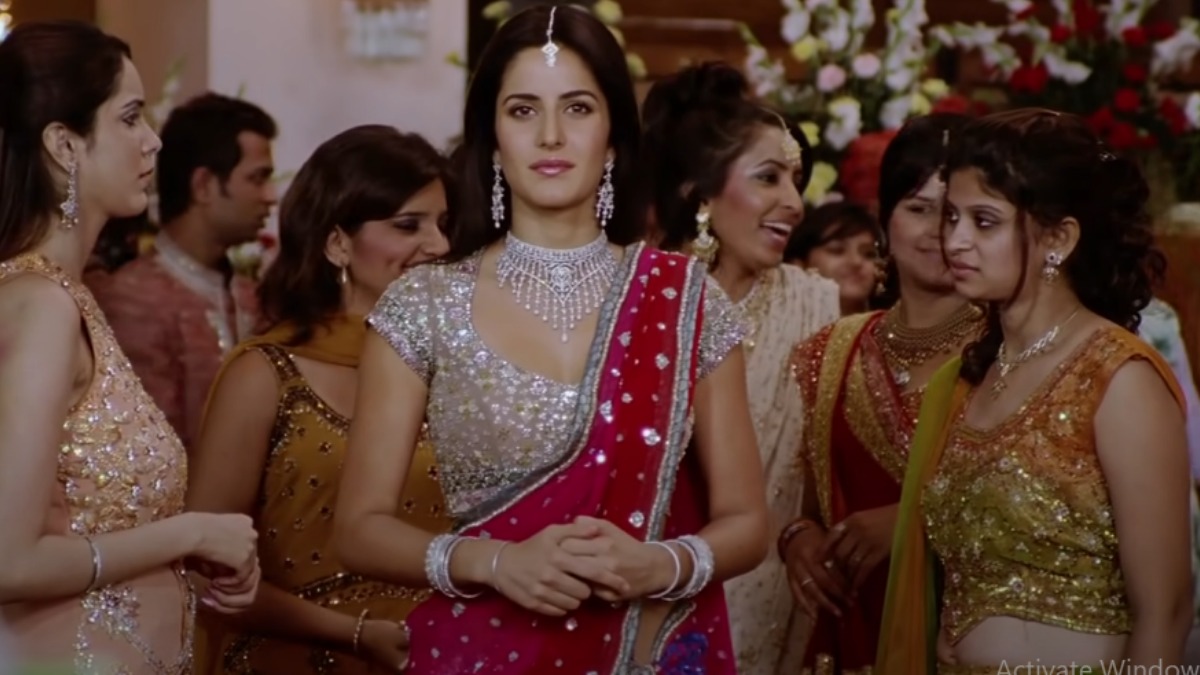 The beauty was once again seen in a lehenga-choli attire, but kept her look minimal. There was no heavy jewellery or makeup and that made her look like a simple, chic Indian bride. 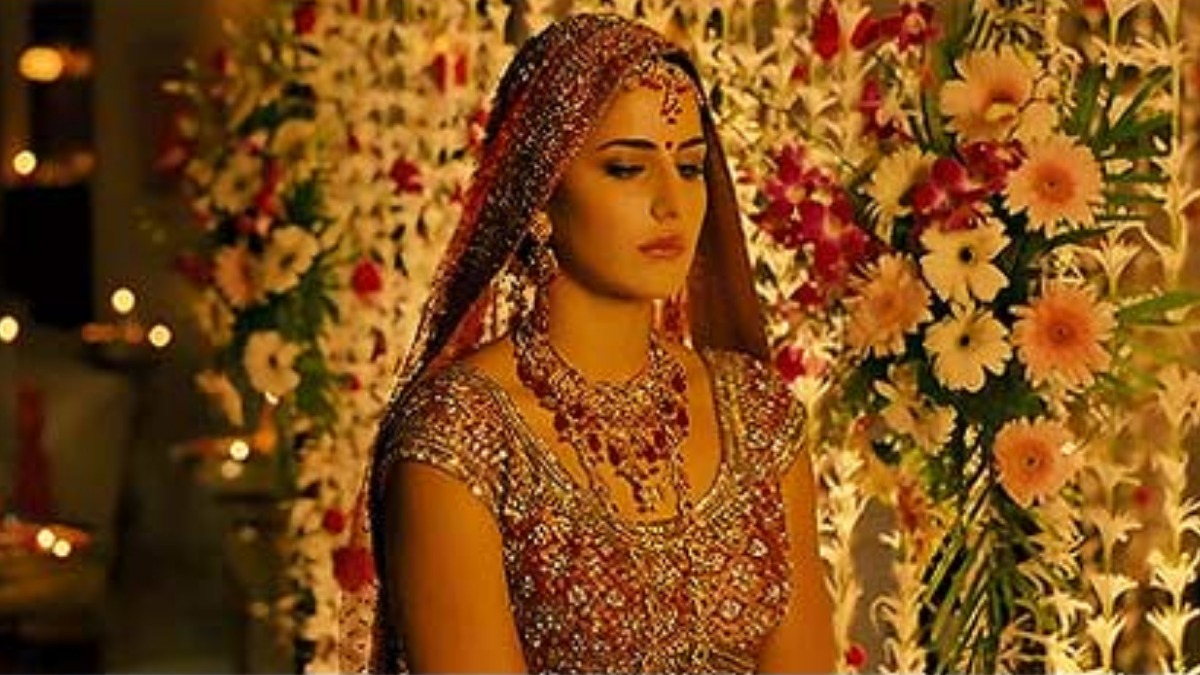 Katrina Kaif was given the traditional bridal look with red and gold combination outfit that was heavily embellished. And the neckpiece with matching maang tikka with a pair of earrings made her look regal. 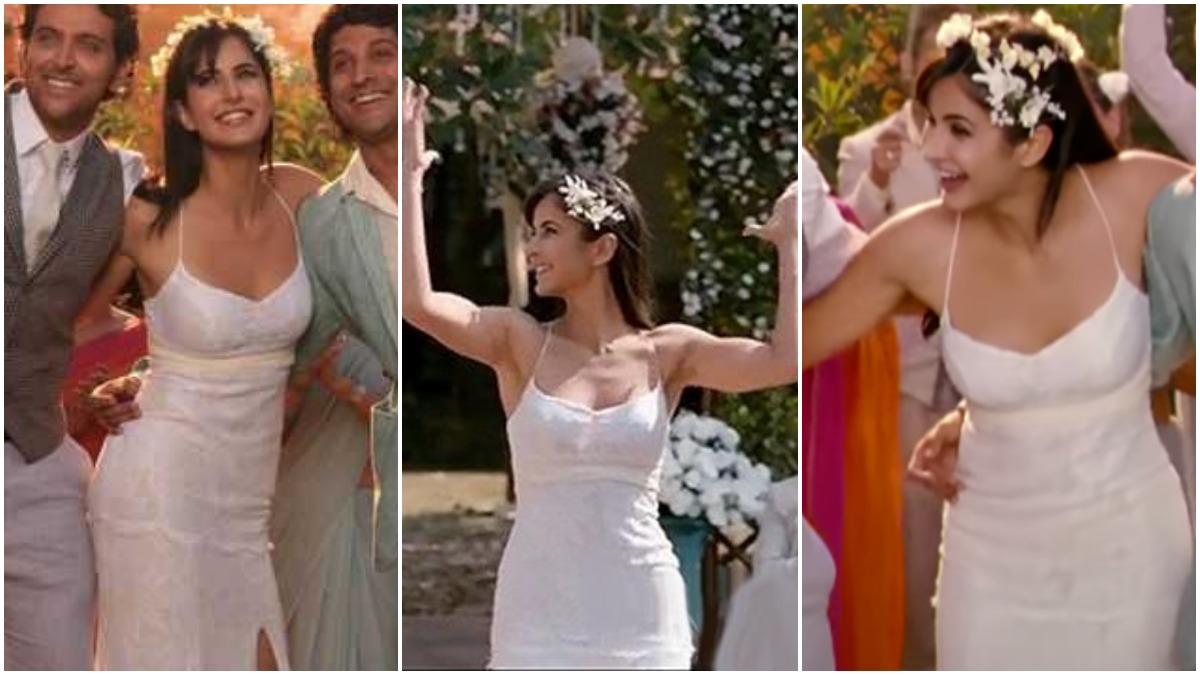 Katrina Kaif looked like a vision in that white dress! She was an all-cool bride who had kept her look totally classy. The floral headpiece and the minimal makeup just amped up her style game and that look set fashion goals in real too. 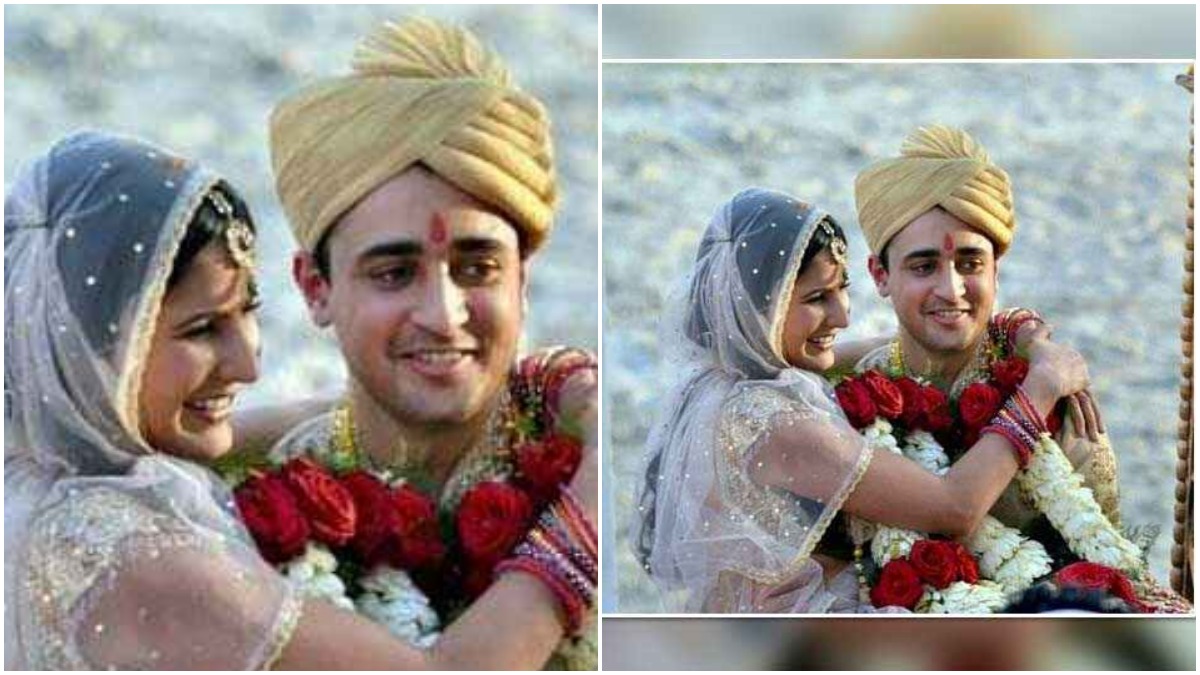 The gorgeous actress once again nailed the bridal look. This dulhan showed that it is okay to keep it minimal and yet one can look ravishing on their big day. 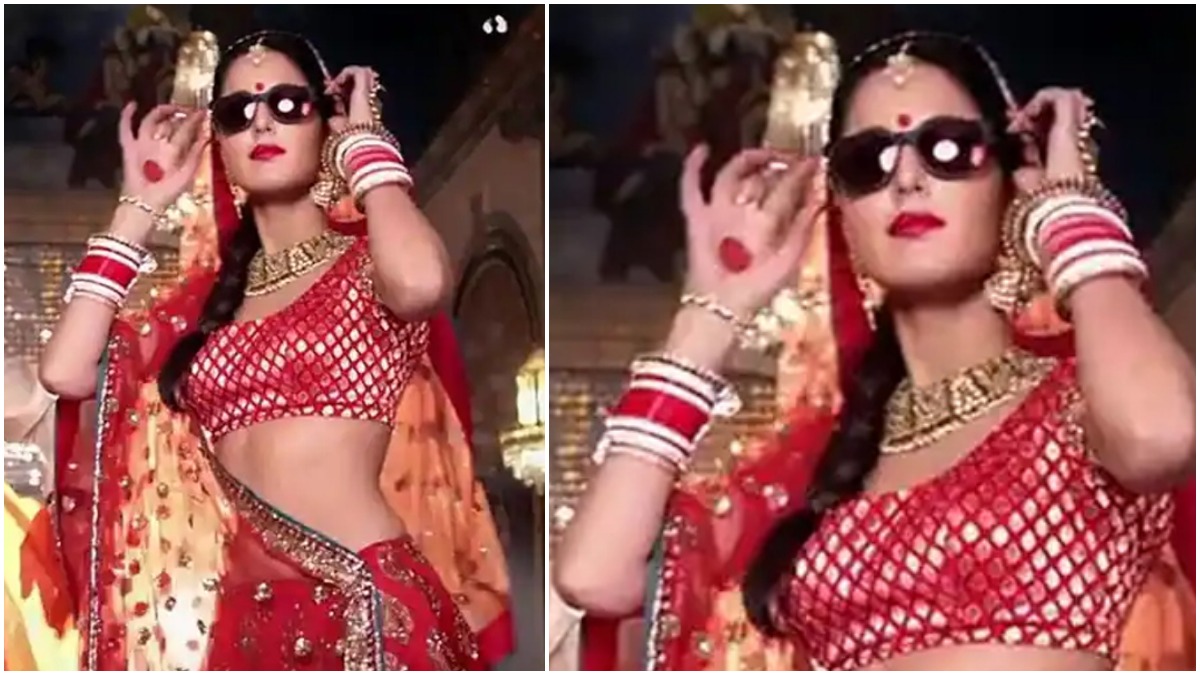 One would really want to see Katrina Kaif baar baar the minute she wears a red coloured outfit. In real and reel, we haven’t often seen the beauty slaying in red and in this film too, she looked spectacular in the red lehenga-choli. 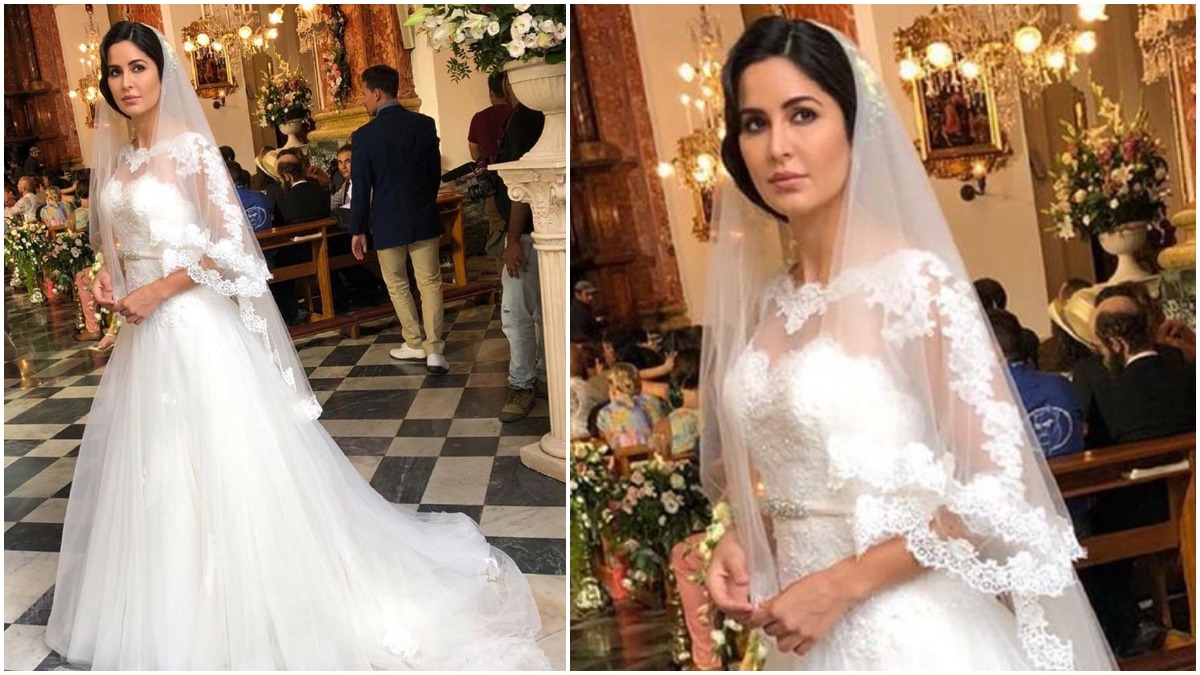 Katrina was once again seen as a Christina bride and she was looking spectacular. The princess gown with lace bodice and beaded belt lining designed by Ashley Rebello was just beautiful. 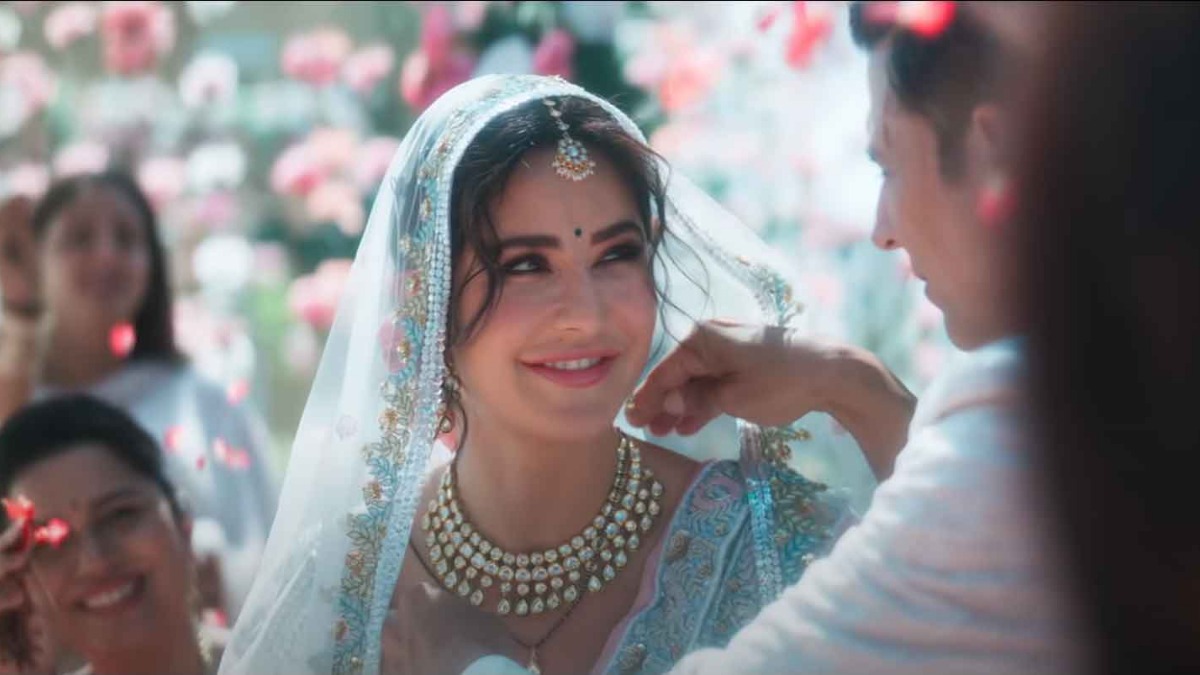 Who doesn’t love blush colours? Katrina looked breathtakingly beautiful in the light blue coloured embroidered lehenga and it serves as a perfect bridal look for any bride who’d love to keep it minimal on their D-day.

These are some of the stunning bridal avatars of Katrina Kaif in reel. We just cannot wait to see the actress as Vicky Kaushal’s bride and the stunning outfit that she’d be wearing on her wedding day.

(The above story first appeared on LatestLY on Dec 07, 2021 06:12 PM IST. For more news and updates on politics, world, sports, entertainment and lifestyle, log on to our website latestly.com).