Vijay Anand Birth Anniversary: Did You Know An Animated Character Was Modeled On The Actor-Filmmaker In Beavis and Butt-Head Do America? 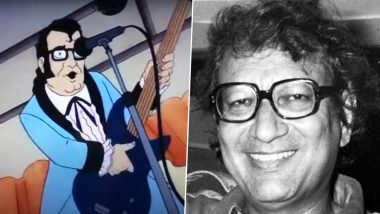 Vijay Anand is one of the greatest filmmakers India has ever seen. While many remember him for his fantastic movies from Guide to Teesri Manzil to more, 90s kids will always see him as detective Sam D'silva who unraveled many mysteries along with his partner Gopichand played by Saurabh Shukla in Tehkikaat. He is known for revolutionise the way songs are shot in movies. If there's the sense of freedom in Aaj phir jeene ki tamanna hai, there's also a suspense-laden number like Hoton pe aisi baat. But what not many know is Vijay Anand became the inspiration behind an animated character in Beavis and Butt-Head Do America.   When Shah Rukh Khan-Kajol’s DDLJ Was Accused of Plagiarising a British Film by the Late Vijay Anand

It is said that Hollywood director Mike Judge was so enamoured by the way Vijay Anand carried himself in movies like Chor Chor, Double Cross and Tere Mere Sapne. That's why he modeled a character in the song Rollercoaster in the film. One of the guitar players on stage is modeled after Vijay Anand. Check it out here...

Vijay Anand had said in an interview, "The man who wants to express, doesn't want to limit himself to only the visual. If he can make people feel the touch of his film, he'll use it definitely! Why not! Limitations limit him, not his need to express and touch the other man." The director is credited for turning Shammi Kapoor into the Elvis Presley of India by making his rockstar character in Teesri Manzil ooze the same charm.

(The above story first appeared on LatestLY on Jan 22, 2021 09:10 AM IST. For more news and updates on politics, world, sports, entertainment and lifestyle, log on to our website latestly.com).