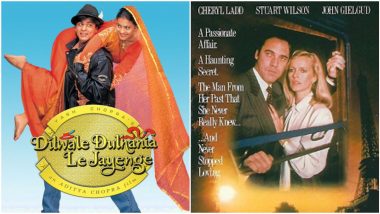 Every now and then, we get to hear new trivia about the film, like how Aditya Chopra once wanted Tom Cruise to play SRK's role, making it interracial romance. SRK even wears the same jacket that Cruise wore in Top Gun in couple of scenes. Or how Jaani Dushman fame Armaan Kohli was approached to play Parmeet Sethi's role, but he didn't take it up because he didn't want to play negative roles. Just another trivia - Armaan Kohli was the first choice for Shah Rukh Khan's role in Deewana, and the makers had even shot posters with him. After he walked out, they replaced him with SRK, including his face in a poster, and the rest is history.

Returning to DDLJ, did you also know of the story when the romance of Raj and Simran was accused of being lifted from a British television movie? And how that accusation hindered its chances at Screen Awards. 25 Years Of DDLJ: Five Things You Did Not Get To See In This Epic Shah Rukh Khan-Kajol Love Story, Directed By Aditya Chopra.

In an article written by prominent journalist Ali Peter John on Bollywood Hungama, he calls the time when DDLJ faced this unusual situation, courtesy the late Vijay Anand. Filmaniacs might remember Vijay Anand, also known as Goldie Anand, as the late Dev Anand's younger brother. An actor and a filmmaker, he had directed classics like Teesri Manzil, Jewel Thief, Johnny Mera Naam and of course, the acclaimed masterpiece Guide.

In the article, John mentions how he had brought Vijay Anand, known to be a stickler for rules and obsession with originality, on the Screen Awards jury. He then wrote what happened next, "The screenings for the jury were conducted at Goldie’s mini-theatre at Ketnav. Dilwale Dulhania Le Jayenge was the hot favourite for winning awards in all the categories. In fact, Jeetendra who was on the jury attended only the first meeting and said all his nominations were for DDLJ. It was time for the screening of the film and Goldie took the jury by shock when he asked for the screening to stop as he said it was a film that was directly lifted from a Hollywood film made forty years ago. He asked the jury for time and the next evening he screened an old Hollywood film called Love On The Orient Express and made the entire jury agree that the idea of DDLJ was plagiarized from the original and as the rules of the jury disqualified any film that was a copy, he as the chairman had decided to disqualify the film as an entry for the awards and the entire jury was one with him."

However, there is another film - a British television movie called Romance on the Orient Express, that the writer might have been referring to, which came out in 1985. Romance on the Orient Express, starring Cheryl Ladd and Stuart Wilson, was about a man and a woman who meet during a train journey as they go on a cross-Europe trip and fall in love with each other. In this film too, it is the father who is the antagonist to their love story, though it is the hero's father and not the female protagonist's.

That's where the similarities between Romance on the Orient Express and DDLJ end though, as the British film veers towards a different direction.

Here are Some Scenes from Romance on the Orient Express:

The article further said, "DDLJ was out of the competition and the news somehow spread all over the industry which was taken by shock. Yash Chopra who was the producer of DDLJ was a dear friend of Goldie and decided to have a talk with him, but Goldie was adamant and Yash fell sick for three days, but Goldie stuck to his decision and the decision of his jury."

However, DDLJ did win three awards at Screen that year for Best Film (Yash Chopra), Best Director (Aditya Chopra) and Best Actor (Shah Rukh Khan). So we really don't know what to make of this story!

(The above story first appeared on LatestLY on Oct 19, 2020 09:36 PM IST. For more news and updates on politics, world, sports, entertainment and lifestyle, log on to our website latestly.com).