Virat Kohli in his recent interaction shared his excitement for embracing fatherhood for the first time and also revealed how their fans and well-wishers showered them with all the good wishes and amazing reactions. 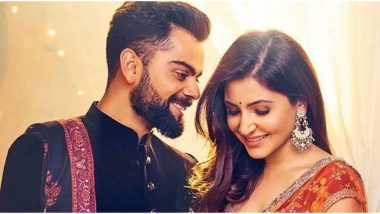 Virat Kohli and Anushka Sharma should be credited for making this year somewhat bearable to us. The couple was quick to join the bandwagon of expecting celebrities and share this happy news with their fans and admirers. Virat is currently in UAE for the IPL 2020 season and Anushka is by his side, taking all the necessary safety precautions. The Indian skipper in his recent interaction with RCB Bold Diaries, the sports team's official YouTube page, reacted to his wife's pregnancy and described it as an incredible feeling. Anushka Sharma and Natasa Stankovic Wore the Same Black Polka-Dotted Dress During Pregnancy and Internet's Obsessed With It (See Pics).

"It puts things into perspective for you. It is a beautiful feeling. It is difficult to describe how you feel, but when we found it, we were over the moon. When we announced, the kind of love that was showered on us it was amazing. People were genuinely so emotional and happy for us. We are looking forward to the third member joining the clan," he said when asked about how their fans and well-wishers reacted to the news of them embracing parenthood. Anushka Sharma and Virat Kohli Announce Pregnancy: Fans Pour In Warm Wishes For The Power Couple (View Tweets).

You Can Check His Conversation Here

Anushka and Virat were among the many couples who finally had all the time to enjoy each other's company. Speaking about how the lockdown allowed them to spend some quality time together, he said, "The best thing [about the lockdown] was Anushka and myself were at home. We never got so much time to spend together since we started seeing each other, to be honest. Just being in your own home with the one you love, you couldn't ask for anything better. We just made the most of that whole time."

The couple's first child is due in January 2021.

(The above story first appeared on LatestLY on Sep 02, 2020 11:43 AM IST. For more news and updates on politics, world, sports, entertainment and lifestyle, log on to our website latestly.com).