Waheeda Rehman Birthday Special: Five Lesser Known Facts About The Legendary Actress That You Must Know

Waheed Rehman turns a year older today while continuing to be the most graceful actress ever. While she builds on her passion for wildlife photography, here're a few unknown facts about the actress. 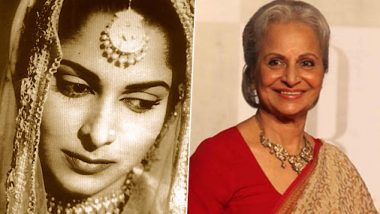 Waheeda Rehman is one of the most alluring and fantastic actresses of Indian Cinema. If her portrayals were soaked in grace, so was her personal demeanor. Despite doing some of the strongest and at times controversial roles, Waheeda Rehman never felt the need to conform to norms. Her ride in Bollywood began with Guru Dutt's CID and later became his muse in Kagaz Ke Phool and Pyaasa. Her association with the master filmmaker was a legendary story and so was their rumoured love story. Hyderabad Vet Rape & Murder Case: Rapists Deserve Life Term in Jail, Not Death, Says Waheeda Rehman

Waheeda Rehman aged so gracefully that we would all want to do the same. She played the love interest when young, the supporting characters soon after and also did justice to mother's roles. Now, she is content being a wildlife photographer. Check out some lesser-known facts about this splendid actress.

During Jaipur Lit Fest, Rehman revealed that Guru Dutt and Raj Khosla tried really hard to convince her to change her name. She said, "They quoted examples of Dilip Kumar, Madhubala, Meena Kumari and others who had changed their names. It was like a fashion then. They said 'Waheeda Rehman' was not sexy. But I was adamant since the name was given by my parents and I love it." That rattled the two men quite a bit, she added.

In an interview to Hindu, Rehman revealed that she wanted to play the role of Biwi in Saheb Biwi Aur Ghulam but Guru Dutt felt she was too young for it. Choti Bahu was played Meena Kumari.

Waheeda Rehman wanted to be a doctor but after her father's demise, she needed to support her family financially. Hence she took up movie offers based on her dancing abilities.

#Dancer to a brilliant actress

Since Waheeda Rehman was a trained Bharatnatyam dancer, she took up dancing gigs in movies. Her acting career began when the producer of her debut Telugu film Rojulu Maraayi urged her to be part of the cast. Her mother wasn't too kicked about it. The film was a success and it paved the way for more acting roles.

Waheeda Rehman and Rajesh Khanna starrer Khamoshi is one of the best films that was ever made in Indian Cinema. And it was Rehman who suggested Hemant Kumar to sign Rajesh Khanna in the film.

(The above story first appeared on LatestLY on Feb 03, 2020 09:00 AM IST. For more news and updates on politics, world, sports, entertainment and lifestyle, log on to our website latestly.com).