What Are the Odds Movie Review: Abhay Deol Stars In This Charming Oddity With Fine Acts From Yashaswini Dayama and Karanvir Malhotra

What Are The Odds? is directed by Megha Ramaswamy. The movie is streaming on Netflix, and stars Yashaswini Dayama, Karanvir Malhotra, Abhay Deol, Priyanka Bose, Monica Dogra, Manu Rishi Chadha and Sulabha Arya. 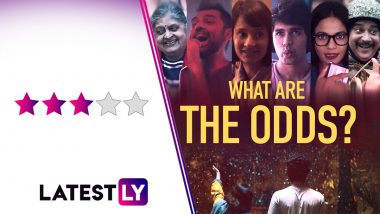 What Are The Odds? Movie Review (Photo Credit: Netflix)

What Are The Odds Movie Review: A goldfish that talks. A request to call a restaurant manager turns into an drunken group chant. A man named Amol Palekar urinates from the building terrace for years and has made himself a nice little vegetable garden in the process. Monica Dogra gets sent a potted plant filled with dog poo. A man confesses his love to his lady with a set of false dentures. Mumbai sees a climate phenomenon that the city has never seen, like ever! What Are The Odds Trailer: Yashaswini Dayama, Karanvir Malhotra and Abhay Deol Team Up For a Quirky Coming-Of-Age Tale (Watch Video).

Those are some of the few oddities that you will find in Netflix's new film, What Are The Odds?, directed by debutant Megha Ramaswamy. The movie, while funny in its own quirky way, isn't everyone's cup of tea. But if you do have a taste of a little whimsicality in your humour, What Are The Odds? is one and a half hours that you won't mind missing.

On any normal day, Vivek Anand (Yashaswini Dayama) and Ashwin (Karanvir Malhotra) wouldn't have been friends. Vivek, nonchalant about her boyish name, is rebellious in spirit and thinks education is merely a tool for the system to suppress the students. Music and arts are her life. She is just coming out of a failed crush over Val (Abhay Deol), the lead singer of the band, The Kapoors. Her parents are mostly never there for her, which means she has to look after her grandmother (Sulbha Arya), who is suffering from Alzheimer's.

Ashwin, meanwhile, is quite the opposite - a model, studious student who is also the school's Head Boy. The child of biologist parents, he is also in a relationship with an older lady, Paloma (Priyanka Bose). Due to Vivek's mischief, both miss their Hindi scholarship exams and end up spending the day together. Both get to know each other's idiosyncrasies, while creating chaos at a bar, fussing over a goldfish and making a social statement over caged animals. Which wouldn't have happened on a normal day, but that day was odd!

Any project involving the choosy, reclusive Abhay Deol is bound to be not the usual types. Whether it turns out to be good or bad, it doesn't deny itself from being peculiar. What Are The Odds? that has him don dual hats of being an actor and producer is such a quaint one. What Are The Odds? Teaser: Abhay Deol's Film Looks Quirky and Fresh (Watch Video).

It is a film that isn't much about anything - just two teens doing teenage stuff, and acting like actual teens. What Are The Odds doesn't delve into differentiating how oddly different Vivek and Ashwin are, instead letting us in on the weird but fun times that happen when they spend time together. Ashwin might be looking at Vivek to let his spirit loose, and the perennially-frenetic Vivek might want Ashwin to harpoon some of her rebellious spirit. We don't know, but they do end up doing things together, and making confessions about themselves that they never have done before. And on the way they get to see some unusual sightings that they only witnessed because they chose to pause.

Watch The Trailer of What Are The Odds?:

The charm in What Are The Odds? lies in Megha's simplistic execution. Not to mention, some very unusual visuals. The natural performances of the two leads - Yashaswini (Phobia) and Karanvir (The Forgotten Army) - keep things engaging, even when the movie has nothing to say. Special mention to a couple of lovely ballads (Sagar Desai) that had left me tapping my feet in rhythm, without any deliberation.

That said, you also can't rid of the fact that in its obsession with emptiness, the film sacrifices in adding depth to its character building. Like the scene, where Vivek creates a fantastical reason for her absent father is a pretty nice one, but the movie direly needed more such scenes. Also wish that some of the other odd characters like Vivek's granny and her Arts group member (played by Manu Rishi Chadha), along with Ashwin's 'lady' could have been developed further. At present, they are just weird and could have been more than that. Even if the lovely climax nicely ties up the little plot points that you may or may not have liked.

- Odds Not Stacked For Everyone

What Are The Odds? is an oddly pleasing film that ditches reasoning for peculiarity, which mostly work in its favour. The movie is streaming now on Netflix.

(The above story first appeared on LatestLY on May 20, 2020 01:35 PM IST. For more news and updates on politics, world, sports, entertainment and lifestyle, log on to our website latestly.com).