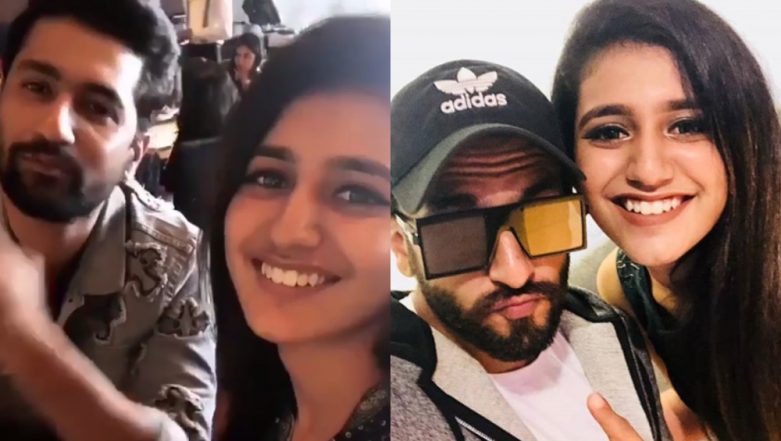 Priya Prakash Varrier conquered hearts with just a wink. And looks like she is all set to conquer Bollywood next. The viral sensation was spotted hanging out with Bollywood hunks Ranveer Singh and Vicky Kaushal last night around the time of screening of Uri. The actress' pictures and videos with the two actors, who will be seen share the screen in Karan Johar's Takht, are not viral on the internet. In a viral video, Vicky and Priya can be seen re-enacting her viral scene from the film, Oru Adaar Love. But with the twist that the Uri actor was holding the finger-gun and not Priya. Super cute.

Priya looks set to enter the glamour industry in Bollywood as well. There is a strong reason why you could spot her in Bollywood's vicinity. The actress will soon be seen in a Hindi film titled, Sridevi Bungalow. The first look of the film will be released next week. Disha Patani Recreates Priya Varrier’s Iconic Wink for a New Ad and We Can’t Stop Crushing Over It – Watch Video.

Talking about Sridevi Bungalow, director Prashanth Mambully has told an entertainment portal,  “The movie is a suspense thriller that paints the life of a Bollywood actress named Sridevi played by Priya.”

“It is a big budget movie and will have a few prominent actors from Bollywood too. The story is set in London. We completed the first schedule last week and the second schedule begins on January 15,” he added.

Priya has already been dubbed as the national crush, so we know she is a profitable name. Now we know she'd look very good in a frame with Ranveer and Vicky. Now, we won't be surprised if a Bollywood producer puts two and two together.