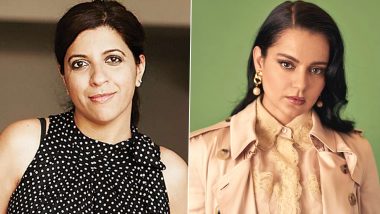 Zoya Akhtar directorial Gully Boy became one of the most loved films of 2019, as it received 13 Filmfare awards and was also India's official entry to the 2020 Oscars. Despite achieving this huge, Kangana Ranaut has always felt that this Ranveer Singh and Alia Bhatt starrer was a 'mediocre' film and did not deserve this much of buzz. Recently, Zoya along with her brother Farhan Akhtar and lyricist Javed Akhtar appeared on India Today TV where she responded to the remarks made by Kangana on her film. She said that she does not mind varied opinions about her work. Sonu Nigam Lends Support To Kangana Ranaut, Says I Choose To Believe Her.

Speaking to the channel on the same, Zoya mentioned that it's Ranaut who boycotted awards and so she does not understand her constant rant. On being quizzed whether she gets affected by criticism about Gully Boy winning this many awards, she replied, “Not at all, because I didn’t go for the award ceremonies, for starters, and it’s not important. She herself has boycotted the awards, so I don’t know why she keeps talking about them.”

Further, when asked if she would invite Kangana to her next party, Zoya said, “She has gone on every platform and basically said that she does not like my work, so I shouldn’t be putting her in that position.”

“You make a film and everybody is entitled to their opinion, and they are entitled to share this opinion because we are still a democracy. I can’t get offended. I have chosen to be here and do this work, and there will be people who don’t like my work and there are people that like my work, and it’s fine," she expressed. Taapsee Pannu Takes a Sly Dig at Kangana Ranaut Calling Her a B Grade Actress, Here's What She Said.

Also, it was after Sushant Singh Rajput's untimely demise that the nepotism debate sparked once again. Zoya also addressed the same and said, “If I have money, I am putting money on my son, this is nepotism? Then every industry there is nepotism." “If I am a barber and I have a barbershop, am I going to leave it to my son or am I going to leave it to the best barber in the city? And that’s the bottom line,” she added. Stay tuned!

(The above story first appeared on LatestLY on Jul 26, 2020 11:42 AM IST. For more news and updates on politics, world, sports, entertainment and lifestyle, log on to our website latestly.com).