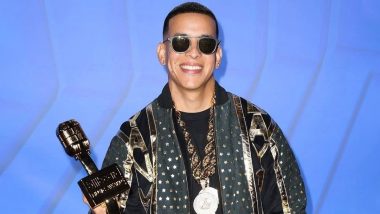 Just ahead of officially entering the Billboard Latin Music Awards Hall of Fame, Daddy Yankee reminded the world why he's El Jefe at the 2021 Billboard Latin Music Awards on Thursday night in Miami, reports Billboard.com. Rolling up to the Watsco Center stage in a subway car thanks to some clever visual trickery, Yankee ran through his new single 'Mtele Al Perreo' from his upcoming album. Justin Bieber, The Kid Laroi’s ‘Stay’ Secures Top Spot for a Fourth Consecutive Week on the Billboard Hot 100.

He is known as the King of Reggaetn by music critics and fans alike. Daddy Yankee is the artist who coined the word reggaeton in 1994 to describe the new music genre that was emerging from Puerto Rico that synthesized American hip-hop, Latin Caribbean music, and Jamaican reggae rhythms with Spanish rapping and singing.

(The above story first appeared on LatestLY on Sep 24, 2021 07:54 PM IST. For more news and updates on politics, world, sports, entertainment and lifestyle, log on to our website latestly.com).