Whenever Dilip Kumar arrived on the sets, the atmosphere on it would change at once. Such was his personality. 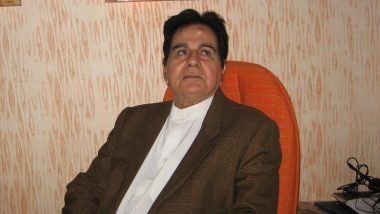 Mumbai, July 7: Whenever Dilip Kumar arrived on the sets, the atmosphere on it would change at once. Such was his personality.

Once, he reached on a grim note to shoot a tragedy narrative, and everybody present on the sets also became serious. It was like attending a funeral.  Dilip Kumar Death: 'Tragedy King' Leaves Behind a Legacy to Cherish Forever

Just then, someone cracked a joke and a few others laughed, and Dilip Kumar saw it. That was it. The actor declared he couldn't do justice to the tragic scene in such a jovial environment, cancelled the shoot, and returned home.

This is an incident recorded in veteran Bollywood mediaperson Jivraj Burman's private notes. Here are some more gleanings from the journalist's diary:

1. Once, during a single shot of hurling a glass of liquor in anger, Dilip Kumar insisted on 27 retakes before he was satisfied that it was 'perfect'.

3. One of his biggest admirers was Dadamuni, Ashok Kumar. Notorious for playing practical jokes, Ashok Kumar said to Dilip Kumar on the sets of 'Duniya': "Yusuf, not in the mood to act? Let us bunk the shoot today!" The mischievous Khan agreed. They called the costume in-charge and asked him to hide their outfits assigned for the shoot. When the shoot started and it was found that their costumes were missing, the two actors 'lost their cool' and coolly walked off the sets for the rest of the day!

4. If Dilip Kumar did not like someone, he could treat him to such a cold stare that the other person would get the message and keep keep away from him. Getting his displeasure across without words was a skill he had mastered.

5. His audiences would just love it when he made his public speeches, speaking in his impeccable Urdu, and getting repeated applause.

7. He owned a large tract of prime land at Deolali (Nashik), but it was taken over by the Indian Army and he fought a long legal case over it.

8. Forever ready to welcome new talent into the industry, Dilip Saab paved the way for the entry of a number of newcomers, including Johny Walker, Aruna Irani, Kader Khan and the diminutive Muhammad Umar 'Mukri', the comedian with whom he shared his birth year (1922) and enjoyed a long-running personal friendship till his death in 2000.

9. In the sunset years of his life, Saira Bano used to take him out for an evening drive in Bandra, but he would remember nothing.

(The above story first appeared on LatestLY on Jul 07, 2021 10:29 AM IST. For more news and updates on politics, world, sports, entertainment and lifestyle, log on to our website latestly.com).