Saba Qamar is one of the bankable as well as highest-paid actresses in Pakistani entertainment industry. 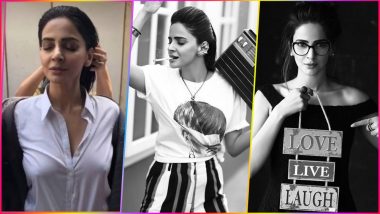 Pakistani actress Saba Qamar is in the eye of the storm after her personal pictures were leaked online. These are in fact behind-the-shot photos posted by someone without the 34-year-old’s consent. Now, these leaked pics are deemed ‘inappropriate’ because it shows Saba Qamar smoking cigarette. Trolls are also attacking the Hindi Medium star as her nipples are visible through her translucent shirt. WTF! Like seriously. If you guys have nothing better to do, allow me to help you. Just for all the lovely online trolls out there, stop getting offended by Saba Qamar’s lifestyle and outfit choices. Instead, scroll down to check out some of the incredibly gorgeous photos of Saba from her Instagram account. Saba Qamar Slut-Shamed for Smoking and Posing ‘Braless’ in Hot Viral Pictures: Pakistani Celebrities Speak in Support of Hindi Medium Actress.

Saba seems to be in the same position as Mahira Khan, her contemporary from Pakistani film and television industry. Last year, it was the Verna star who faced a similar public outrage after leaked pictures showed her smoking with Indian actor Ranbir Kapoor in the New York City. Adding to her problems was the choice of clothes, a backless dress! (Major WTF!) The social media uproar made Mahira Khan seek an apology from everyone, but that’s not what Saba is doing. Saba Qamar Video Going Braless in White Shirt Leaked After Private Photos Cause Uproar on Social Media!

Known for her fiery and strong personality, Saba is not someone to be messed with. In her co-star and actor Osman Khalid Butt’s words, “you do not mess with Saba Qamar.” Way before this ugly episode, Saba had posted a picture from a glamorous photo shoot with a bang on message about the stigma associated with female smoking.

Repeat After Us: Smoking is Injurious to All, Not Just Women

A carefree Saba Qamar is seen smoking a cigarette in this black and white photo. She captioned the image as: “Mard peeyein toh wah 😘 Hum peeyein toh haaaa 🤭 Tum khao toh chips 🍟 Hum khaain toh aaloo 🤢 Smoking is injurious to all, not only to women.😊” It means – If men smoke, it’s wow; if women smoke, it’s urgh; if you eat fries, it’s a snack; if we eat, it’s potato. Basically, Saba tried to convey the message that smoking is injurious to all and not just to female smokers. Check out her other stunning photos and you’ll fall in love with her even more.

Saba Qamar Killing it in This Power Suit!!

Her Irresistible and Infectious Charm

Saba Qamar is one of the bankable as well as highest-paid actresses in Pakistani entertainment industry. She has work in critically-acclaimed as well commercially successful television shows and films. One of the few actors who can pull off any role, be it de-glam or that of a fashionista. Apart from her acting career, Saba has established herself as a fashion icon with a wide following across the globe. More importantly, she is someone who is working towards bringing a positive change, be it by raising her voice against child abuse or standing up for her rights. It is important to stop pulling such brave souls down. So stop it already.

(The above story first appeared on LatestLY on Jul 23, 2018 07:31 PM IST. For more news and updates on politics, world, sports, entertainment and lifestyle, log on to our website latestly.com).