Johnny Depp, 55, wants to marry his Russian girlfriend, Polina Glen, who's 30 years younger than him. 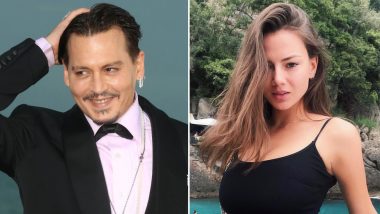 Johnny Depp is in love once again and if all goes well, he may tie the knot with his Russian girlfriend, Polina Glen very soon. The actor is currently hustling with his legal case against ex-wife, Amber Heard but is hopeful about his relationship with Glen. According to the recent reports in E! News, Depp, 55, is completely besotted by this Russian dancer who's in her 20s. Age is just a number for this couple and Glen who's 30 years younger than him has no qualms in settling down. Johnny Depp Wanted Warner Bros to Fire Ex-Wife, Amber Heard from Aquaman?

The actor apparently suggested that she should move in with him at his LA residence and since then she's been accompanying him for shoots and different tours. "Polina met Johnny at a party in LA. She gets invited to a lot of stuff and ran into him...They hit it off. Polina said that they are going to get married and that he wants to go to Russia to meet her parents," said a source close to the website. Johnny Depp vs Amber Heard! Fantastic Beasts Actor Slaps $50mn Defamation Suit Against Ex-Wife Over Domestic Abuse Allegations.

They are dating since 2018 and Metro.com even reported their kissing pictures this year from a hotel in Belgrade, Serbia where Johnny was shooting for his new movie Minamata. After Heard and Depp's divorce in 2017, the former couple is busy accusing each other of domestic abuse. While she claims that he choked, hit, and head-butted her, he insists that Heard is trying to malign his image.

(The above story first appeared on LatestLY on Apr 25, 2019 04:47 PM IST. For more news and updates on politics, world, sports, entertainment and lifestyle, log on to our website latestly.com).