Khloe shared a picture showing off her toned back in a brown bikini while keeping her hand on her butt. She posted the picture to promote the new Good American shoes that were arriving in the market. 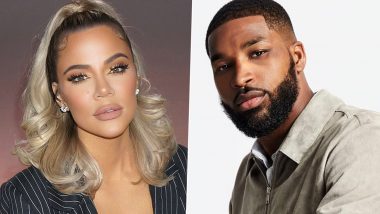 Khloe Kardashian and Tristan Thompson have gone through a lot of ups and downs but have still managed to stay close to each other post the chaos. The duo is co-parenting their two-year-old daughter True Thompson together and are often spotted hanging around with each other. A glimpse of the upcoming season of Keeping Up With The Kardashians also revealed that the reality star is planning on having another child with the NBA player. Khloé Kardashian and Tristan Thompson Trying To Rekindle Relationship?

Now, Khloe's latest picture has sparked engagement rumours and her fans are dying to know if it is true or not. Khloe shared a picture showing off her toned back in a brown bikini while keeping her hand on her butt. She posted the picture to promote the new Good American shoes that were arriving in the market but everyone had their eyes only fixed on her hand. Khloe was adorning a huge diamond ring on the third finger which may be a subtle hint about the engagement.

Tristan dropped a comment on her post saying, "WOW!!!!!!! That grass is cut to perfection," while fans are still trying to figure out if the two have tied the know already. Many were awestruck seeing the size of the rock on Khloe's finger. One of her fans dropped a comment saying, "Is this her way of letting us know she’s engaged?" Another wrote, "Is anyone else not going to talk about this ring?" The picture has garnered more than 2 million likes so far. Khloe Kardashian and Ex Tristan Thompson's Latest Pics Spark Engagement Rumours.

Talking about the duo being ready to welcome another baby, Khloe says in KUWTK's trailer,  "I just feel like it's now time to have another kid." In another  preview clip from the upcoming season of Keeping Up With the Kardashians, Khloe revealed that she is eager to give birth to another kid as she is seen saying, "Kim, every time I post a video of True, she DMs me and she's like, she can't play by herself her whole life."  Tristan had also earlier revealed that he had always wanted four kids.

(The above story first appeared on LatestLY on Feb 22, 2021 06:38 PM IST. For more news and updates on politics, world, sports, entertainment and lifestyle, log on to our website latestly.com).