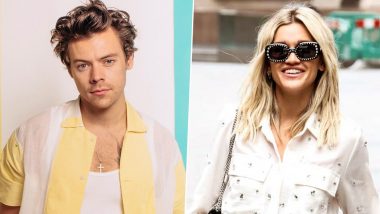 Singer Ashley Roberts finds One Direction star Harry Styles cute. In an interaction with The Sun newspaper's Bizarre column, Ashley praised Harry a lot, reports femalefirst.co.uk. "He (Harry Styles) properly has a 'Boogie Nights' moustache going on and I have to say, what I love about Harry is he's just so adventurous with his looks. Watermelon Sugar Music Video: Harry Styles Leaves Fans Thirsting Over a Fruit; Twitterati Say the Singer ‘Saved’ 2020 With This ‘Fruity’ Treat!

He tries different things and I'm a fan of that. I think he looks cute, I'm for it," she said. Ashley now wants to improve her own Italian language skills to impress Harry, who recently revealed he has been learning the language. Kendall Jenner Goes for a Drive in Her Cadillac With Ex-Boyfriend Harry Styles Riding a Bike Beside Her and We Wonder What’s Cooking!

She added: "I know a little bit but not much. I need to up my game so I can hang out with Harry."

(The above story first appeared on LatestLY on Jul 29, 2020 11:46 AM IST. For more news and updates on politics, world, sports, entertainment and lifestyle, log on to our website latestly.com).