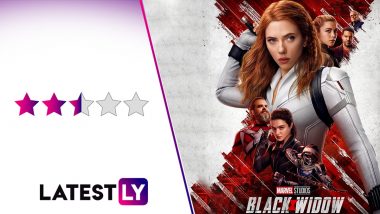 Black Widow Movie Review: Black Widow is the first film in the Phase 4 of Marvel Cinematic Universe. It is also a rare case of a superhero having a solo movie after she died in the last one. And unfortunately in India, Black Widow becomes the second movie of Phase 4 to arrive after Shang-Chi managed to release in theatres the very same Friday. You can blame the pandemic for its fractured release, but I understand the pain of Black Widow fans who accused Disney of not giving the proper goodbye she deserves. Black Widow: Scarlett Johansson’s Marvel Actioner Streaming Now on Disney+ Hotstar in English and Other Regional Languages!

Remember, they were already pissed off that Avengers: Endgame didn't give a fitting farewell for Natasha Romanoff, like it did for Tony Stark, and were totally disappointed that she was missing when the female Avengers came together (albeit felt like forced fan-servicing) during the climactic battle. Yes, Black Widow deserved better. So even if its release was controversial, at least I had hoped that her solo movie would have rectified that problem.

Alas, that was not to be. But I will come to that

Black Widow, directed by Cate Shortland, is set between the events of Captain America: Civil War and Avengers: Infinity War. Which begs you to ask, then why didn't Marvel slot the release of Black Widow between those movies? Is the present slot intended so that fans can watch Natasha reconnect with her past - a past that is tainted with red - with a sense of gloom knowing what awaits for her in the future? If that was the intention, then Black Widow hardly does a good job in instilling that feeling in me.

Anyway, like you already know, because she betrayed T'Challa during the famous airport scene of Civil War, Natasha is on the run from General Ross (William Hurt) and the US government. Instead of sticking with Captain America, Natasha chooses to lead a solitary life in a trailer in Norway. She has a helper in Rick Mason (O-T Fagbenle), who is this movie's equivalent of a genie ready to procure for Natasha anything she wants, only that he is human and is frequently friend-zoned!

Anyway, a mysterious package that arrives at her trailer puts Natasha in mortal peril and makes her come face to face with the even more mysterious Taskmaster, a mute assassin who has mimicked the fighting styles of Natasha's fellow Avengers. Barely escaping with her life, Natasha realises her former boss turned mortal enemy Dreykov (Ray Winstone) is still alive, and he is continuing to brainwash and train younger Black Widows from the Red Room placed in some secret location.

To put an end to his nefarious operation once and for all, Natasha goes to Romania to connect with the recently out of being brainwashed 'sister' Yelena (Florence Pugh). Together, they seek out their fake parents, the 'father' - Alexei Shostakov / Red Guardian (David Harbour) who used to be Russia's answer to Captain America, but is now incarcerated in a prison. And 'mother' Melina Vostokoff (Rachel Weisz) who is living a quiet life in a farm, where she is brainwashing pigs to nearly suffocate themselves!

Black Widow starts off good with a flashback scene that shows a teenage Natasha in US living with her 'family', and seen playing with her younger sister. That illusion of the 'perfect American family' is shattered within seconds as they are exposed as Russian spies planted in American soil, leading the family to escape from there in a thrilling chase.

Actually, more than the chase part, this opening sequence hints at where Black Widow the movie has its strengths lying ahead - the inter-personal moments that Natasha shares with her fake family. Be it their bittersweet luncheon reunion or Natasha confronting her 'mother' - Black Widow works best in those quiet moments. Seeing the layers being peeled about Natasha as a person - after knowing her being fiercely protective about her past - is a fascinating watch, and Scarlett does a fantastic job of pulling those emotional moments of anguish, guilt, ethos, occasional playfulness and protective care for her younger sister.

Sadly, though, the movie often forgets that this is ScarJo's swansong in the MCU, and should have allowed her to be walking away with all the thunder. Especially after having taken so much time to giving her a solo film. Instead, she gets easily overshadowed by Florence Pugh and David Harbour. Florence, whose Yelena is being pursued by MCU to fill in Black Widow's shoes, is an easy scene-stealer, the actress being absolutely on a roll, dropping zingers left, right and centre, and mocking Natasha for her famous landing pose. She also nails that accent quite nicely. Scarlett Johansson vs Disney Row: Marvel Boss Kevin Feige Is ‘Angry and Embarrassed’ With Black Widow’s Digital Release.

Harbour, meanwhile, bring the Papa Bear charm to Alexei, a superhero who is living in the memories of an illustrious past, guilt of his role in what happened to Natasha and Yelena, and boasting about taking on Captain America.

However, while these two actors shine, Scarlett often gets sidelined in the process. There is another matter that Black Widow also disappoints when it turns from a character-driven saga to an MCU action movie. Nothing on Shortland's skills as a director, who at least gives the movie a polished look, but when Black Widow goes into superhero territory, it feels, well, what's the word I can use here... lacking!

Despite the heroes being trained martial arts expert, the action sequences aren't very exciting enough. There are car-chases, hand-to-hand combat, a daring prison escape also involving an avalanche and a mid-air fight among debris, but I was never pulled into being thrilled by those scenes. One thing that might be an affecting factor is that I cared for the fates of heroes other than Natasha here, because I am already in the know of when the latter is going to meet her maker. Still, despite having some polished stunt-work, the action sequences feel dragging.

Also, the movie keeps forgetting what made Natasha, or for the matter Clint Barton (prepared to be disappointed if you expect to see him here), so special as an Avenger. They are special because they managed to stand out in a group of super-powered heroes, purely on their skills. They are simply humans who are unfazed by their company. Yet, Black Widow treats Natasha, or even Yelena, as if they have been injected with Captain America serum. There are sequences where Natasha should have been killed, or atleast left with some broken bones. Instead, she walks out of those situations with merely a little wince.

The third act is also weak, despite the location where the action is set, more so because Black Widow brings forte another problem most of the MCU films face - weak, disposable villains. Dreykov is simply a Russian caricature of an antagonist, we though Hollywood had disposed off a decade back. As for the mysterious Taskmaster, the identity reveal merely elicited a ho-hum reaction from me. It certainly didn't help matters that the name of the actor who played the role was already revealed in the opening credits! Even the CGI is disappointing in these scenes.

I have been reviewing movies since 2015, and have loved Marvel movies even before that. I have not given a single rating below three stars to an MCU movie to date, because they didn't give me an opportunity to be disappointed. Even weaker films like Avengers: Age of Ultron did entertain me for the whole runtime. Unfortunately, Black Widow is the first time an MCU film left me truly disappointed, not just in the way how they wrote Natasha's sendoff, but as a whole package.

- Weak, When It Tries to Get Into MCU Territory

What can you say about a movie, when its lead star itself is disappointed with what transpired with it? Sure, Scarlett Johansson was mostly annoyed with Black Widow's release strategy, but I am irked with how they gave her a very underwhelming project to bid farewell to her Marvel fans. ScarJo deserved better, Black Widow deserved better and as a Marvel fan waiting for this film to happen, I also deserved better. Black Widow is streaming in India on Disney+ Hotstar.

(The above story first appeared on LatestLY on Sep 03, 2021 02:31 PM IST. For more news and updates on politics, world, sports, entertainment and lifestyle, log on to our website latestly.com).