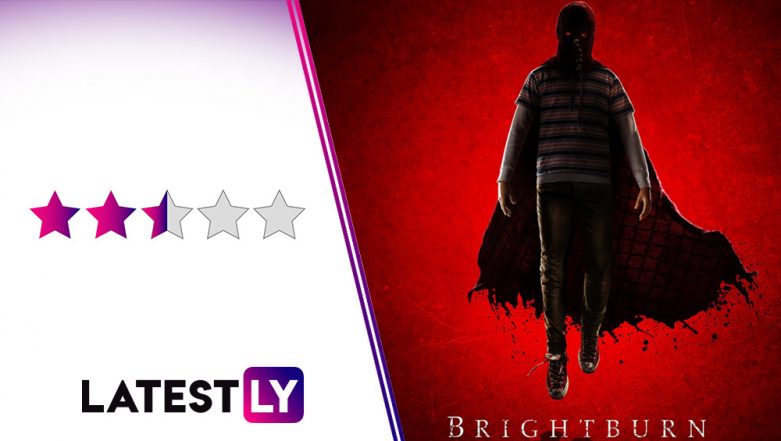 In a world where aliens are still considered to cause harm (thank you for that, Thanos), Brightburn does not offer anything different. With a project that gives a Predator-ish vibe, Elizabeth Banks' this film is quite a confusing and diabolical one. It actually takes time for the audience to get completely engaged in the film but perhaps you can't blame the actors or the plot. It's strictly the screenplay and writing that is to blame here. The makers of Guardians of the Galaxy thought, why not create a brand new genre, a radical superhero one, which would have the audience confused on whether to root for the anti-hero or just watch the gore carnage. So does this film hit the high notes or tumbles down the drain? Read on to know our full review. Brightburn New Trailer: Meet the Superman That We All Should Be Afraid Of - Watch Video.

The plot of the film centres around Brandon Breyers (played by Jackson A. Dunn), a young lad in his teens who is special. He is smarter than the rest in the class, stronger too, although his appearance comes across that of a lanky fellow with all the brains and no might. Anyway, turns out he is adopted by Tori (Elizabeth Banks) and Kyle (David Denman) under strange circumstances. They don't hide the fact that he is adopted from him but they never really reveal his true parentage or past. He is somewhat of a radical superhero, in terms of the makers. But is he though? The boy has a bad temper and cannot stop himself from feeling superior from others. Also, he knows why he was sent to Earth, to "Take the World". With his agenda set, he first needs to get a few hassles out of his way so that he can do his job right. Honestly, kid, you need to take some lessons from Thanos on how to be a good anti-hero. James Gunn on Life After Being Fired by Disney: ‘Brightburn Was a Great Help’.

Directed by David Yarovesky, the screenplay has been produced by the Gunn brothers, Brian and Mark. The overall production has been taken over by James Gunn, who has already had his share of drama in the recent past with him being sacked from Disney but being hired by Warner Bros for Suicide Squad. We don't need to get to the depths of that because it does not concern the film. Instead, we need to talk about how Brightburn, despite having high ambitions takes a rather grim and dull turn. From the start itself, the film is confusing. It doesn't go in a strategic direction as people and truths keep popping up from out of nowhere. All too get to see is some amazingly brutal killing that perhaps Ted Bundy would have enjoyed watching or committing (no offence there!).

Despite having a good cast, the track is so slow and banal that eventually, you're left yawning and sometimes looking through your Twitter feed! Perhaps a good pace and great storytelling would have helped the film. I don't have a problem with the approach or the story of the film, per se. But they could surely have upped the ante by following a path wherein the film made sense! The boy has issues, but why? The boy is angry, but why? The boy doesn't trust anyone, but why? The boy especially hates and despises his father, oh that's normal. He just wants to kill everyone who is aware of his background. This includes his parents, who already know about his extra-terrestrial-ism! What do you want, kid? The cinematography of the movie is also not very appealing as the imagery doesn't seem original. They literally picked up a scene from Pet Sematary!

- Lack of strong motive or conflict

- Haphazard overlapping of scenes with no proper explanation

- Is he a radical superhero though?

People who enjoy gory content would be thrilled to watch the film. However, that is the only selling point of this movie. The film is a snoozefest and will put you to sleep within minutes from it kicking off.