On Charlize Theron's 46th birthday, here's naming some of our favourite movies starring her. 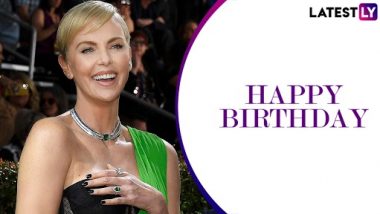 Charlize Theron has of late become our favourite name in Hollywood. Especially, since she started attempting more of the action genre and raising her bar with each outing. The beautiful actress celebrates her birthday today and what better day to plan a marathon of her movies. And while we'd enjoy that, here's also recalling some of her best performances from the recent past - the ones that have assured us that there cannot be anyone like Theron ever again! So, on Charlize Theron's 46th birthday, here's naming some of our favourite movies starring her. Charlize Theron Birthday Special: She Prefers Anything That's Black or White on the Red Carpet (View Pics).

When an MI6 agent is sent to Berlin to investigate the death of a fellow agent and also acquire a list of double agents, she unravels a web, that only gets interesting with time. Charlize Theron is at her best in this actioner that takes you back in time to the Cold war era. This movie probably makes you aware that Theron was always meant to do more action movies.

Oh, where do we even begin? The masterpiece from George Miller, Mad Max: Fury Road is based in an apocalyptic world where a woman rebels against a tyrannical ruler. The cinematography was brilliant but so was Charlize as Furiosa and Tom Hardy, of course.

A movie based on true events sees Theron as a popular news anchor who decides to support her female colleague in her fight against the head of a media company. The movie that drew inspiration from the #MeToo movement was lauded for its powerful performances, storyline and makeup and hairstyling that even won an Oscar.

A group of ancient warriors are still fighting to save the present day, are suddenly exposed of their abilities. A business tycoon wants to replicate their powers for his selfish gains and Charlize's character is striving hard to protect those like her. Another actioner starring Theron that cements the fact that she does action better than her contemporaries. Charlize Theron's Netflix Film The Old Guard Creates History by Reaching 72 Million Households in 4 Weeks.

Remember Players? Yes, that horrible multi-starrer starring Abhishek Bachchan, Sonam Kapoor, Bobby Deol, Neil Nitin Mukesh along with others. Well, the movie was inspired, rather a remake of this brilliant one. Charlize's father is killed during his last heist by one of his team members and she plans on seeking his revenge. She then joins the gang members who are equally desperate to seek vengeance from one of their own.

(The above story first appeared on LatestLY on Aug 07, 2021 09:15 AM IST. For more news and updates on politics, world, sports, entertainment and lifestyle, log on to our website latestly.com).