Christmas 2020 is around the corner and what a way to spend the beautiful evening of December 25 with your loved ones and watch out a film which is not a typical Christmas movie but a Hollywood flick set in the backdrop of this wonderful occasion. 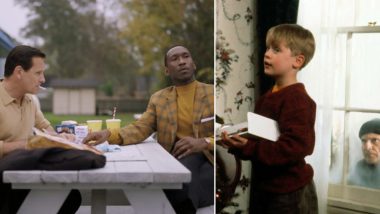 Christmas 2020 is here and what a way to spend the beautiful evening of December 25 with your loved ones and watch a film which is not a typical Christmas movie but a Hollywood flick set in the backdrop of this wonderful occasion. Some films are about Christmas but some of them have this endearing season set in the film but is not an X-Mas themed movie on a whole. It is almost like watching a regular movie during Christmas but then the inclusion of this festival is not at all the central theme of the film. There are ample of Christmas movies suggestions on the internet but we are here to recommend some of the non-X-mas movies you can watch with your friends on December 25. Christmas 2020 Movie Marathon List: 9 Xmas Day Special Movies Available on OTT That You Should Watch on December 25!

Peter Farrelly's oscar-winning movie Green Book stars Italian-American bouncer Viggo Mortensen who takes the job of a driver of an African-American musician played by Mahershala Ali who is on a tour of America in the 1960s. The two of them completes the tour of self-discovery as they stand tall together fighting every act of racism. They return their respective home on Christmas eve and the film concludes with how a racist man goes through a change of heart and greets his friend of colour at the dinner on X-Mas. Christmas 2020 Style Ideas: ’Tis the Season to Dress Up and Dazzle, Here’s Your Celebrity-Approved Style Guide!

Catch Me If You Can

Steven Spielberg’s crime-drama starring Leonardo DiCaprio as the con man features a scene from Christmas Eve where both Frank Abagnale (Leonardo DiCaprio) and FBI agent Carl Hanratty (Tom Hanks) as the film's opening sequence takes place in a rainy Christmas Eve of 1969, at a prison in Marseille, where Carl arrives with the extradition papers to take Frank back to the United States. Christmas actually turns out to have more appearances in the film as Frank starts calling con man Carl Hanratty and yes the FBI agent who is chasing him almost every year on Christmas Eve.

Bruce Willis 1988 thriller has our hero stuck in an office building hijacked by the bad guys. The events of the movie take place on Christmas eve, but it was released during the summer of 1988. No way this one feels like Christmas movie and the action-adventure actually showcases a disaster happening on a night of Christmas Eve.

How can we forget Tina Fey’s Mean Girls for it's iconic ‘Jingle Bell Rock’ scene which makes this slapstick comedy memorable?  The female cast including Lindsay Lohan, Lacey Chabert wearing the loud red X-mas costume in this rom-com makes it an unusual X-Mas flick.

Home Alone is a 1990 movie that has succeeded in establishing itself as a traditional Christmas flick as most of the viewers may see it.

However, the backdrop of a Christmas vacation fits in perfectly as Macaulay Culkin who plays the film's lead Kevin McCallister, an average American child who is left all alone after missing his flight with the family. In the entire film, we see Culkin in a rat and mouse chase with burglars making it one of the most entertaining films of all time.

(The above story first appeared on LatestLY on Dec 24, 2020 10:51 PM IST. For more news and updates on politics, world, sports, entertainment and lifestyle, log on to our website latestly.com).