Deadpool 3 Confirmed as an R-Rating Movie! Ryan Reynolds Shares the Happy News With Fans in His Classic Funny Style

Deadpool fans can rejoice as the film is finally happening and it is happening with an R-Rating only. Marvel Studios president Kevin Feige confirmed the news and shared all the details about the filming. 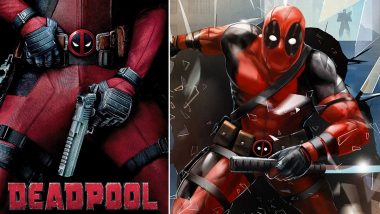 The future of Ryan Reynolds' Deadpool franchise was hanging on a cliffhanger ever since Disney bought 20th Century Fox. The film is an R-Rating movie and considering the exclusively PG-13 environment of the Marvel Cinematic Universe, many wondered how will Deadpool 3 fit into that box. Deadpool had paid off for Fox in a big way and had become one of the most successful superhero movies so it was definite that MCU would not throw it away but the question remained how were they going to fit it in their universe. Deadpool 3: Oscar-Winner Taika Waititi Might Direct Ryan Reynolds’ Superhero Film.

Well, the answer is finally out and all Deadpool fans can rejoice as the film is finally happening and it is happening with an R-Rating only. Marvel Studios president Kevin Feige confirmed the news and shared all the details about the filming. Ryan also took to Twitter and confirmed the news in his own goofy style. He tweeted by making a joke about MCU's Spiderman and how he convinced them to make Deadpool 3 happen. Is Deadpool 3 Happening? Director David Leitch Clueless, Creator Rob Liefeld Says It'll Happen After Fans Question Its Absence from Marvel's Comic-Con Announcement.

Talking to Collider, Kevin said, "It will be rated R and we are working on a script right now, and Ryan’s overseeing a script right now… It will not be [filming] this year. Ryan is a very busy, very successful actor. We’ve got a number of things we’ve already announced that we now have to make, but it’s exciting for it to have begun. Again, a very different type of character in the MCU, and Ryan is a force of nature, which is just awesome to see him bring that character to life.” Sisters Lizzie Molyneux-Loeglin and Wendy Molyneux will be working closely with Ryan on the script!

Since MCU already has their hands full production-wise and they won't kickstart the work on Deadpool 3 until 2022, it is safe to say that the film will hit the theatres in 2023. Apart from this, the team is already Thor 4 and Spider-Man 3, and this year will also begin filming Doctor Strange 2, Black Panther 2, and Captain Marvel 2.

(The above story first appeared on LatestLY on Jan 12, 2021 11:50 AM IST. For more news and updates on politics, world, sports, entertainment and lifestyle, log on to our website latestly.com).