Doctor Strange in the Multiverse of Madness: From Tom Cruise's Iron Man to Professor X, 7 Crazy Cameos Rumoured To Be In Benedict Cumberbatch's Marvel Film!

It has been speculated for a good while that we will see Marvel’s Illuminati in the movie, and it will consist of many legacy Marvel characters. So with that being said, here are seven of the craziest cameos rumoured to be in Doctor Strange in the Multiverse of Madness. 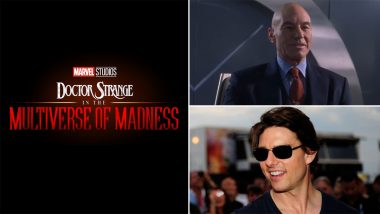 7 Rumoured Cameos in Doctor Strange in the Multiverse of Madness (Photo Credit: Twitter)

Apparently we will see an alternate version of Monica Rambeau in Doctor Strange in the Multiverse of Madness. Considering she is just supposed to be a cameo, it does lead to the fact that exactly how this version of the character came about to be in Illuminati.

We will also see Hayley Atwell reprise her role as Captain Carter from What if…? This rumour doesn’t seem like that much of a stretch considering that we will also be seeing Evil Strange in the movie.

If true, the amount of Norse characters in the MCU are about to increase with Balder making his appearance in the movie. Inspired by his Norse counterpart, Baldr, Balder will apparently also be a member of the Illuminati.

Rumours suggested that the reshoots that took place last month happened so that Marvel could add some extra cameos to the film. One of the names being tossed around was Mr Fantastic. It would be a bit odd for the MCU to introduce Mr Fantastic like this considering a Fantastic Four movie is about to be released in a few years.

Another huge name being tossed around was Tom Cruise as an alternate version of Iron Man. It is a well-known fact that before Robert Downey Jr took over the role, Tom Cruise was being heavily courted to play Tony Stark. If true, this would make for an extremely exciting scene in the movie.

This is the one that’s the most believable considering there were a few pre-vis shots for this too. We don’t exactly know which version of Charles Xavier might show up, many are hoping for it to be Patrick Stewart. But it would be fun to see an Illuminati be led by Charles Xavier.

This is the one that’s the most outlandish rumour out there and one that is still oddly believable? Hugh Jackman was vocal about how Kevin Fiege was in touch with him to do something in the MCU, but the plan never materialised. Maybe with the reshoots he might have been added in. If he is, then this cameo might be even bigger than the appearances of Tobey Maguire and Andrew Garfield in Spider-Man: No Way Home.

Doctor Strange in the Multiverse of Madness comes out in theatres on May 6, 2022.

(The above story first appeared on LatestLY on Jan 11, 2022 03:42 PM IST. For more news and updates on politics, world, sports, entertainment and lifestyle, log on to our website latestly.com).