Eternals: Salma Hayek Talks About Her Role As Spiritual Leader Ajak in the Marvel Film, Says ‘Everything Is Possible’ 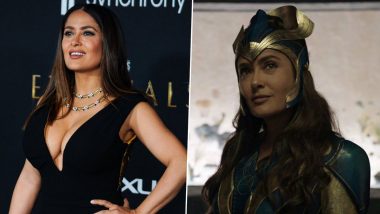 Actress Salma Hayek had given up hope of landing a role as a superhero, but after nabbing the part in 'Eternals', she believes "everything is possible". The actress, who plays spiritual leader Ajak in the Marvel film, had dreamt her whole career of landing such a role in a "big blockbuster" and had given up until director Chloe Zhao approached her for the movie, reports femalefirst.co.uk. Eternals: Ma Dong-seok Opens Up About His Character Gilgamesh in the Superhero Movie, Says ‘It Reflects My Signature Action Style’.

Speaking at a press conference for the movie, she said: "You fight for it in your 20s, in your 30s. And in your 40s, you go 'Screw that, they don't get it. You know, they don't give me squat. I would have been great. You know the art films! I would have been a great superhero, however, they didn't see it. Screw them, we'll go do something else. Eternals Release Date: Marvel Film Confirmed to Clash With Akshay Kumar’s Sooryavanshi on Diwali 2021.

"Let's have a baby. And they didn't see her. And you give up. It's very humbling when in the middle of your 50s, a brilliant director gives you the opportunity to do something that comes from a deep place, that it's also a big blockbuster. I was wrong. Everything is possible. And, it's such a humbling sensation." The 55-year-old star wasn't keen to even audition for 'Eternals' because she figured she'd just be playing an extra or "the old prostitute" but she snapped at the chance when she found out the filmmaker was involved.

Salma recently recalled: "I said, 'Forget it'. I said, 'God knows what kind of grandmother they want me to play'. I'm used to being told I'm going to be the extra or the old prostitute. And then they said the director was Chloe Zhao, and I said, 'Okay! Let's have the meeting'."

She had also recently shared that she feels lucky to be in such a diverse Marvel movie, which also stars Brian Tyree Henry as Phastos, the first openly gay superhero in a Marvel movie, as well as Lauren Ridloff, who plays deaf superhero Makkari. She said: "I love it that I'm in the one Marvel movie that is completely diverse and very different than all the other ones."

(The above story first appeared on LatestLY on Oct 23, 2021 11:31 PM IST. For more news and updates on politics, world, sports, entertainment and lifestyle, log on to our website latestly.com).