Ford v Ferrari is one among the many movies to have its premiere at the annual Telluride Film Festival. Its screening was held at the film fest recently and going by its first reactions, Matt Damon and Christian Bale's racing drama looks like a winner already. Twitterati and critics are mighty impressed with its execution and we are waiting for November. 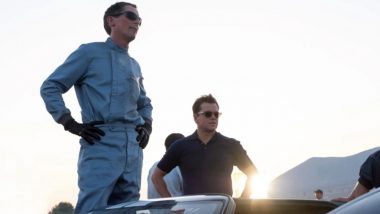 Who else is eagerly waiting for Ford v Ferrari to hit the screens? Raise your hands and give us a virtual high-five for we belong to the same category. The trailer of Matt Damon and Christian Bale's racing movie looked promising. The movie is a classic tale of friendship, unlike the title that suggests rivalry. It revolves around Carroll Shelby and Ken Miles' characters played by Damon and Bale respectively who convince their bosses at Ford that they can win Le Mans against the Italian giant - Ferrari.

The premiere of Ford v Ferrari was held at the Telluride Film Festival 2019 and its first reactions from the same are out already. The ones who were fortunate enough to catch its big premiere night have all the possible good, no, in fact, great thing to say about this racing drama. It's a crowd-pleaser and an entertainer in all parts. For some detailed reactions and different views, check out the tweets that we have handpicked for y'all. Tracy Letts to Star in 'Ford Vs Ferrari' as Henry Ford 2.

#FordvFerrari just kicked off #Telluride and is an expertly made crowd pleaser. Christian Bale is as excellent as always and it’s also a strong contender for sound and especially editing. pic.twitter.com/gH2PUpP97e

Ford V Ferrari is an exciting & entertaining film fueled by passion & friendship. A great ensemble cast lead by two powerhouse performances from Matt Damon & Christian Bale. James Mangold has made another winner. My only complaint is that it’s a bit slow at first. #FordVFerrari pic.twitter.com/PXdRPav1BM

It's long but entertaining

FORD v FERRARI is a solid, roaring, muscle fueled film from James Mangold about setting aside ego & pushing each other beyond our limits. Long but entertaining. Bale has the flashier role than Damon but both turn in strong work. #TellurideFilmFestival #TellurideNBP #FilmTwitter

So glad WAVES premiered at Telluride tonight so I can SCREAM FROM THE FUCKING ROOFTOPS how perfect in every regard this film is!!!! One of the best artistic offerings we've seen from this decade

Wondrously ... a new word for our dictionary

#FordvFerrari is big, wondrously loud (it’s car racing after all) and has a lovely friendship at its heart. So my reservations are vexing me. More soon. But, ah that #ChristianBale. Always engrossing, seldom if ever the same. #TellurideFilmFestival

FORD v FERRARI is every bit as thrilling and suspenseful as you’d expect. Great performances all around too but Christian Bale wins this race. #fordvferrari #TellurideFilmFestival

Now we are curious to know details about its sound

#FordvFerrari revs on all cylinders, with Christian Bale’s piston-pumping performance leading the film across the finish line. Editing, cinematography, and score are all top-notch achievements, but the sound work dominates the film. Could be a big contender below the line. #Tff46

Ford v Ferrari is not a fictional story and is based a true events. The film is slated to release on November 15, 2019, in India

(The above story first appeared on LatestLY on Aug 31, 2019 03:11 PM IST. For more news and updates on politics, world, sports, entertainment and lifestyle, log on to our website latestly.com).