Godzilla Vs. Kong May Be the Next Big Hollywood Project to Skip Theatrical Release!

In the wake of coronavirus, we hear that the monster verse film Godzilla Vs. Kong might go the digital route and may release on Netflix or HBO Max. Currently, the theatrical release date of the film is May 21, 2021. 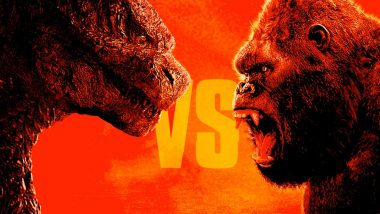 In the wake of ongoing coronavirus, we've seen blockbusters like Mulan (Disney+) and Wonder Woman 1984 (HBO Max and in theatres) going the digital way. Well, now looks like the monster film Godzilla Vs. Kong is also embarking on the ditto path and might release on a streaming giant, exclusively reports The Hollywood Reporter. The two possible platforms it might release are Netflix or HBO Max. The theatrical release date of the film is currently May 21, 2021, but you never know what happens in this time span. Godzilla vs. Kong Gets Postponed, Alexander Skarsgard Starrer To Release In May 2021.

As per the portal, Netflix has already flaunted a huge sum and made an offer of USD 200 million for Godzilla Vs. Kong, while WarnerMedia, whose Warner Bros Studio has a stake on the film, has already sealed the deal for its streamer, HBO Max. Now, this is really engrossing, considering who will win among the two biggies? Amid this, a Warner Bros spokesperson said, “We plan to release ‘Godzilla vs Kong’ theatrically next year as scheduled.”'Godzilla Vs. Kong' to Release in November 20, 2020.

Tricky and uncertain looks like the fate of Godzilla Vs. Kong. This flick is the fourth instalment in the monster verse and will be a follow-up to 2019’s Godzilla: King of the Monsters. Helmed by Adam Wingard, it's going to star Alexander Skarsgard, Millie Bobby Brown, Rebecca Hall and Kyle Chandler in key roles. Stay tuned!

(The above story first appeared on LatestLY on Nov 26, 2020 06:29 PM IST. For more news and updates on politics, world, sports, entertainment and lifestyle, log on to our website latestly.com).