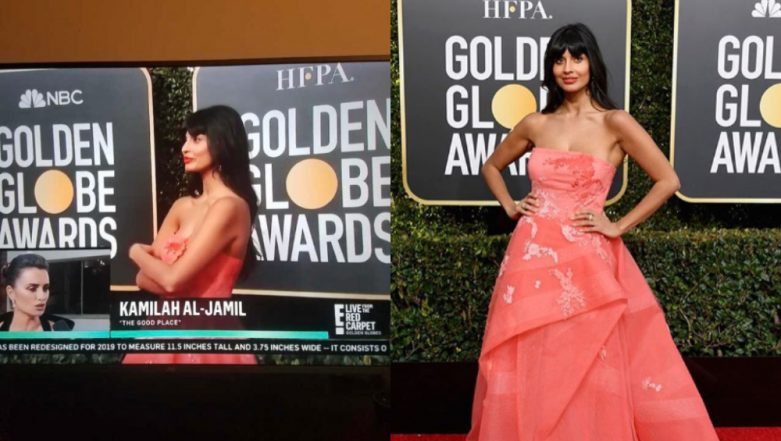 The 76th Golden Globe Awards wrapped up early in the morning with Rami Malek and Glenn Rose walking away with the highest honours. But let us backtrack a little bit and admit that the actual winner at the Golden Globes was actress Jameela Jami for her super-fun zen mode. E! News, one of the most esteemed portals covering the ceremony, misnamed the actress in their red carpet coverage and pretty much turned into the best joke of the evening. But Jameela took the mistake in stride and actually made a jib at the news channel. Let us fill you up.

Jameela Jamil plays the role of Tahani Al-Jamil in the hit comedy TV series, The Good Place. Her character on the show is stuck in the vortex of hell and struggling to find a way to heaven. During the red carpet coverage, she was named Kamilah Al-Jamil by E. Which is more perplexing than you think. Because Kamilah is the name of Tahani's sister on the show. The sister who is infamous for stealing the spotlight at all times from Tahani. So, basically, the character ended up stealing the spotlight even in real life at the awards show. Golden Globe Awards 2019 Best Of Red Carpet: Nicole Kidman, Lady Gaga, Sandra Oh, Julia Roberts Look Drop Dead Gorgeous!

Of course, the internet was amused by the error.

How are you gonna disrespect both Jameela AND Tahani like that at the same time 😭😭 #GoldenGlobes pic.twitter.com/pY2s6PL2gr

Netflix, which also streams the show, took the joke forward and wrote:

Give #TheGoodPlace fan who works at E! one billion dollars for this savage insult on a shot of Jameela Jamil that would ENRAGE Tahani pic.twitter.com/2hetvBskIb

Jameela was herself in no mood to take offence and hit back:

E live red carpet. This is legit the funniest thing I have ever seen. What a joyous mistake. Tahani would DIE! LOO LOL LOL. #witherTahani ? pic.twitter.com/iAtu3ktfiE

Hands down the greatest of red carpet jokes from whoever did this. It’s made my night.

Well, this has got to be the most hilarious name slip-ups in the history of news portals getting it wrong. Including the time Deepika Padukone was referred to as Priyanka Chopra by a foreign media outlet.

Well, coming back to Tahani, E! News should let the poor lady die in peace at least.