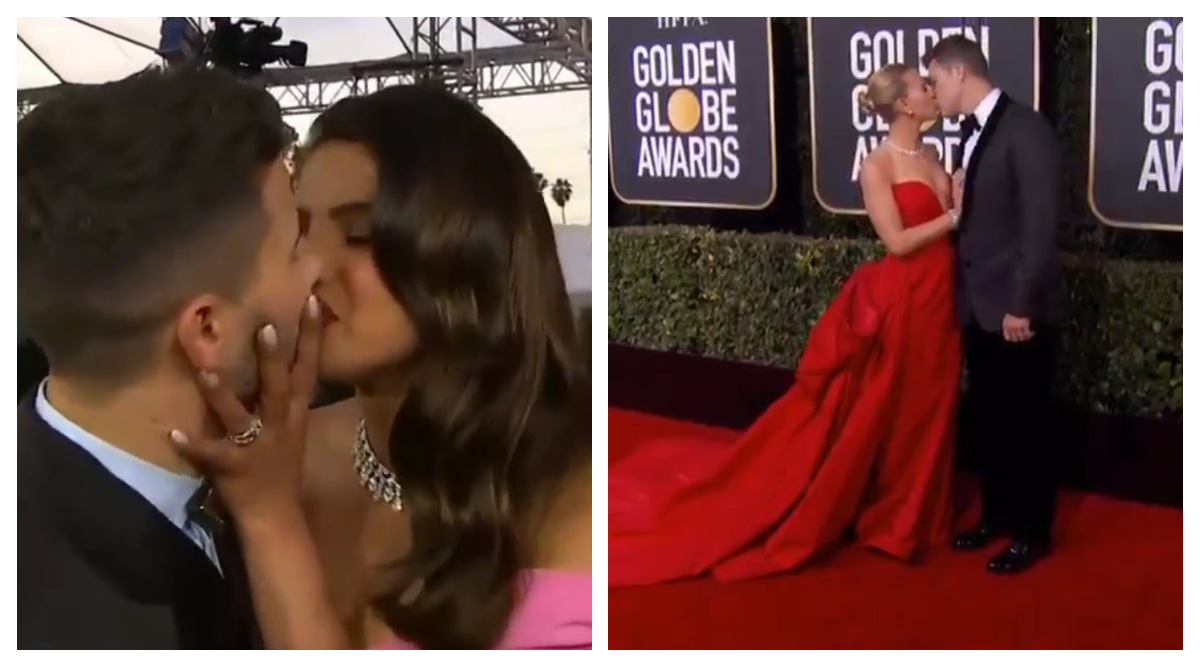 The 77th Golden Globe Awards have concluded. We got some amazing moments to watch as the show unfolded. Some favourites won, some favourites lost. But that is the part and parcel of award shows. What was also part of this year's Golden Globes is some adorable kisses. We not only got to see the couples we were expecting kissing each other, but some very unexpected actors ended up locking lips as well. We are listing down 5 of our favourite kiss cam moments from the ceremony. We are not limiting it to the actual ceremony, but including the red carpet as well. From Scarlett Johansson to Priyanka Chopra to Ellen DeGeneres, all were feeling a little mushy today as they kissed their partners. Golden Globes 2020: Christian Bale, Octavia Spencer Absent Due to Health, Russell Crowe Skips Due To Australia Fires.

There were two kisses between people who were not partnered at all. It is the time and era of platonic kisses, friends. So, without further ado, here are the 5 kissing moments that left us impressed.

ScarJo made her engagement to SNL writer Colin Jost on a recent episode of his show, which she was hosting as a guest. Today, the good looking couple walked the red carpet of Golden Globes together and had their PDA mode on. When the actress was posing for the photographers, she pulled in Colin for a click. As Colin left the frame again, the couple exchanged a very quick kiss. Adorable.

Nickyanka have never shied away from PDA. But, today, they did. They were asked by reporters of Access Hollywood to kiss each other on camera. Priyanka seemed a little hesitant. PC was worried that she will stain Nick's lips red with her strong lipstick colour, she later revealed. After pulling back once, she finally gave in and kissed her husband. She did leave a mark but also wiped it with her thumb, cutely.

Ellen was honoured with Carol Burnett Award at the Golden Globes. She was sitting with her wife, Portia. Before leaving for the stage to collect her award, Ellen locked lips, just for a second, with Portia.

The way Portia looks at her 🥰 the kiss ❤️ #EllenDegeneres #GoldenGlobes #GoldenDiscAwards2020 pic.twitter.com/rI54EeomYE

Brian bagged the award for Best Actor In A TV Series for HBO's Succession. On his way to the main stage, he made a pit stop on his co-star Kieran. They kissed on the lips and Brian moved on. The two play father and son in the hit series and are married to women in real life.

Okay, this one is also an absolutely platonic kiss. Taron won the award for Best Performance by an Actor in a Motion Picture -- Musical or Comedy for Rocketman. On his way to accept the award, he leaned in and kissed Rami's head.

So, those were our five public kisses from the Golden Globes 2020. Which one your favourite? As we enter 2020, let us normalise couples indulging in PDA. Also, dudes platonically kissing their male friends is the absolute energy we should be entering 2020 with.