This is one Monster vacation that is better left avoided. 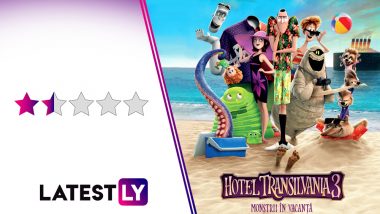 Hotel Transylvania series is quite a money-spinner franchise, even if the movies aren't exactly critic-proof. Featuring the voice-talents of Adam Sandler and his usual gang of actors, like Andy Samberg, Steve Buscemi, Kevin James, David Spade, the franchise has managed to endear itself to the kids. Now arrives the threequel, Hotel Transylvania 3: A Monster Vacation (or Summer Vacation, as the movie is sold overseas), with the aim (and going by how it has dominated the US box office, it has achieved its goal). The movie is directed by Genndy Tartakovsky. But do our kids deserve this silly excuse of puerile jokes? Well, read our review to find out -

Count Dracula (Adam Sandler) continues to run his ancestral hotel in all earnestness, with the help of his daughter Mavis (Selena Gomez) and his human son-in-law Johnny (Andy Samberg). But he feels quite lonely and yearns for female company, which is mistaken by his daughter for boredom. So to take his mind out of the rut, Mavis takes the Count and his friends to a cruise vacation. There he falls in love at the first sight (zinged!) for the ship's human captain Erica (Kathryn Hahn). Little does he know that Erica belongs to Van Helsing family, whose great-grandfather Abraham (Jim Gaffigan) wants to use the monster cruise as an opportunity to kill Dracula and his clan.

Hollywood animated movies usually have high benchmarks set for themselves, with the recent films like Incredibles 2 and Isle of Dogs waving the flag high. And then comes a movie like Hotel Transylvania 3 with content so immature that it uses that flag to wipe its backside. Yes, Hotel Transylvania 3 is a really awful movie filled with typical over-stretched unfunny jokes that only Adam Sandler and co. can enjoy.

I found the previous Hotel Transylvania movies mildly entertaining, to say the least, even though they relied too much on toilet humour and fart gags. There was something worth investing in Count's bonding with his daughter, her fascination for an over-exuberant human and Count trying to figure out whether his grandkid has vampire genes. However, Hotel Transylvania 3 is bad, even by the low standards set by the previous movies. For there is not a single subplot in the movie that will pique your interest even a bit.

The whole Dracula love story-cum-assassination plot is trite and predictable, with an outcome that even a five year old can deduce. The rest of the subplots are equally silly, including a totally unwarranted gag about Drac's grandkid and his dog, whom he tries to hide in the cruise as a monster. It adds nothing to plot but a lot to our tedium. The movie ends with the message about how humans and monsters can coexist with each other, which is exactly what the previous movies in the franchise told us.

With a lack of even a mildly interesting story, the usual Sandler tropes feel even more insufferable. The unfunny gags try too hard to elicit guffaws from kids and get too stretched to make any impact. Adam Sandler goes way too overboard with his fake Romanian (or whatever it is) accent. And of course, there are enough bodily fluids thrown around for the sake of laughter. The dialogues are corny at best and hardly something that previous movies haven't utilised when it come to monster puns. Sample this - Frankenstein's wife telling him off for losing 'an arm and leg') to gambling. Geddit? (BTW, it is Frankenstein's monster. Frankenstein was the scientist who created him, a fact these movies screw up).

Even some of the important characters from the previous movies like Johnny and Drac's father get a raw deal. I can't, for the hell, figure out how the franchise wants us to view the human characters. Even for an animated movie, it feels highly disbelieving that human characters like Johnny and Erica can thrive with monsters, considering some of the living conditions shown in the film. Are we supposed to believe that Johnny can swim with ease around an underwater volcano like his monsters-in-law?

The bigger question is even if the movie is aimed at kids, why do you want scenes like three women appreciating a man's butt? Or why do you want your child to find humour in the various barf and fart jokes?

However, Hotel Transylvania 3 is not without some goodness. The animation is top-notch. The underwater Atlantis sequence where Dracula follows Erica is mildly interesting. The voice-talents does best with what they can. There is also some semblance of intelligence in some ideas. Like how a certain 'youthful' music genre is used to torture the 'ancient' monsters.

Sadly, the good parts, little though they are, is brought down by poor execution. But then, what can you say about a movie that ends with a DJ fight? Sigh!

- a trying too hard voice cast

- the lack of a good plot

- Adam Sandler at his irritating best

Hotel Transylvania 3 is the Ridiculous 6 of not just the franchise, but the whole genre of animated movies. Your kids might laugh at some of the jokes, but it's up to you whether you want to subject them to this brand of humour. This is one Monster vacation that is better left avoided.

(The above story first appeared on LatestLY on Jul 18, 2018 09:27 PM IST. For more news and updates on politics, world, sports, entertainment and lifestyle, log on to our website latestly.com).