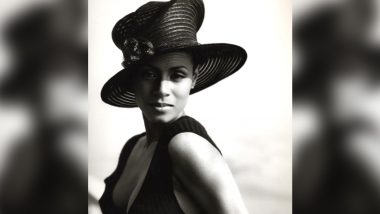 Actress Jada Pinkett Smith says police brutality is nothing new, and is glad that the atrocity is getting highlighted thanks to social media. "Police brutality is nothing new but it's more visible now because of cellphones and because of social media helping to share images and video," variety.com quoted Pinkett Smith as saying. "The difference now is that we are watching executions on television, which is mind blowing. Lady Gaga Speaks Out Against Racism, Stupid Love Hitmaker Terms White Supremacy as a Poison

We are watching young men and young women gunned down on live TV and people are in the streets recording it. We've heard about it before and it would get written up, but now you have the visuals that make it real. We get to see it and that's the difference. You can look at it and see for yourself what's happening," she added. The actress puts spotlight on police brutality in her upcoming animated short film "Cops And Robbers". Lovecraft Country Review: Racism Is Scarier Than Man-Eating Monsters in This Gripping Horror-Fantasy Series

"As an African American woman, it was one of those pieces that I could feel powerful messaging with such compassion from the perspective of the African American community. It was this explanation with this bleeding heart of what we are experiencing during this particular time. For me, it was this emotional connection that pierced my heart and soul," she said.

The actress continued: "It was also written by a very talented African American male, and then, I realised how many minorities had contributed their talent as animators to the project. It's important that I flow resources in any way that I can to voices and the talent I feel as though doesn't always have equal opportunity."

She feels the story has "so much vulnerability". "A lot of times, you could get this messaging and sometimes it can be militant and have power to it. The way this particular expression that we don't often see while talking about topics of this kind had so much vulnerability, especially through the lens of a Black man. You do not see that a lot and that for me was important because it humanises Black men. It also humanises Black people and marginalised communities," the actress said.

(The above story first appeared on LatestLY on Nov 24, 2020 06:31 PM IST. For more news and updates on politics, world, sports, entertainment and lifestyle, log on to our website latestly.com).