John Cena Birthday Special: 5 Characters That Made The Suicide Squad Star’s Transition From WWE to Hollywood a Success Story!

Ever since 2006, John Cena has appeared in quite a number of films, ranging from action to comedy. So to celebrate his 44th birthday we are taking a look at 5 of his characters that made him a star. 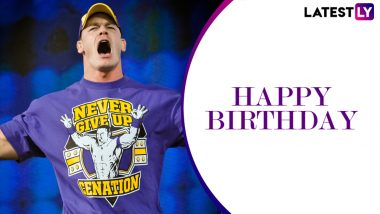 Since WWE days John Cena has made quite a big name for himself in the entertainment realm. Being the face of the biggest wrestling entertainment in the world, he became quite recognizable. He was a star, his face was everywhere and then he got an opportunity, an opportunity to star in a film produced by WWE themselves and so began his acting career. Ever since 2006 he has appeared in quite a number of films, ranging from action to comedy. So to celebrate his 44th birthday we are taking a look at 5 of his characters that made him a star. Happy Birthday John Cena: From Asim Riaz to SRK to Sachin Tendulkar, Here Are Indian Celebs Who Found Place in WWE Superstar's Instagram and Twitter Handles.

The acting debut of Cena, the film follows an ex-marine who returns back home and finds it hard to adjust to his normal life. His wife then decides for them to go on a vacation and then all hell breaks loose as his wife is kidnapped by a gang of robbers. While the film was a critical failure, it still made quite a profit at the box office and launched Cena into Hollywood.

His second film, 12 Rounds, sees him as detective Danny Fisher who is trying to complete 12 rounds of challenges and save his wife from an arms dealer. While the role was quite similar to his previous role as John Triton, the film was still marginally better and entertaining and made Cena even more popular as he proved himself to be a capable action star.

Showing off his comedic chops in Trainwreck, Cena plays the role of Steven who goes out on a date with Amy in the film. While not in the lead role this time, Cena proved himself to be quite a scene-stealer and showed some really great comedic timing. John Cena Birthday Special: Workout And Diet That Helps The WWE Superstar Maintain His Jacked Up Physique (Watch Videos).

In this comedy directed by Jason Moore, we see Cena play a drug dealer. While his role is limited, he still steals every scene he is in showing off his comedic chops again and proving himself to be quite a talented comedic actor.

Cena’s first big blockbuster, we see him play Jack Burns, an agent of Sector 7. His role is that of capturing the Autobot Bumblebee who crash lands on Earth. This was the movie that pushed him into the spotlight and made him a household name.

(The above story first appeared on LatestLY on Apr 23, 2021 01:50 PM IST. For more news and updates on politics, world, sports, entertainment and lifestyle, log on to our website latestly.com).