Johnny Depp, after the loss of libel case against The Sun in U.K., released a statement revealing he is no longer a part of Fantastic Beasts 3 and that Warner Bros. had asked him to step down. However, he thanked fans for their unwavering support and said he will continue his fight. 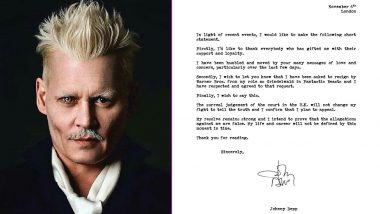 Actor Johnny Depp recently lost his libel case against the U.K. publication The Sun after the called him a "wife-beater" with regards to his case with ex-wife Amber Heard. And that has led to the actor being asked by Warner Bros. to resign from the Fantastic Beasts 3 and his role of Gellert Grindelwald. While fans of the Pirates of the Caribbean actor rallied behind him after the actor lost his case, major studios currently working with him do not feel the same. Johnny Depp Loses Libel Case Against a Tabloid That Tagged Him a ‘Wife Beater’, Court Says Accusations Were ‘Substantially True’.

Well, as per reports in We Got This Covered, while his role in Fantastic Beasts 3 as Gellert Grindelwald was being re-considered, the report also read that Disney did not want to associate themselves with the actor by bringing him on-board Pirates of the Caribbean franchise anymore. And now, Johnny himself released a statement revealing he is no longer a part of Fantastic Beasts 3.  Fantastic Beasts The Crimes of Grindelwald: 10 Secret Harry Potter Easter Eggs You Should Not Miss Out In The Movie (SPOILER ALERT).

Check Out His Statement Below:

In his statement, Johnny mentioned how in the light of the recent events that he was surrounded in, Warner Bros. had asked him to resign and he had obliged. However, he also went on to say that he will continue to fight the battle. "The surreal judgement of the court of U.K. will not change my fight to tell the truth and I confirm that I plan to appeal. My resolve remains strong and I intend to prove that the allegations against me are false. My life and career will not be defined by this moment in time," Depp's statement read.

(The above story first appeared on LatestLY on Nov 06, 2020 10:39 PM IST. For more news and updates on politics, world, sports, entertainment and lifestyle, log on to our website latestly.com).