Jurassic World: Fallen Kingdom is, in my humble opinion, the second-best directed Jurassic Park movie in the whole franchise. 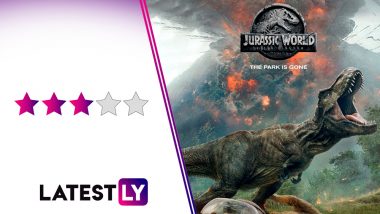 When Jurassic World came out in 2015, it rekindled a sense of nostalgia in us who have geeked upon the original Jurassic Park trilogy. Now that nostalgia is done away with, here comes a sequel that promises to be scarier while pushing ahead the concept of humans sharing the world with dinosaurs. Jurassic World: Fallen Kingdom hits theatres in India on June 7, two weeks before the US release. Directed by JA Bayona, Jurassic World Fallen Kingdom brings back the leads of the first movie, Chris Pratt and Bryce Dallas Howard. Here's our review of the sixth movie in the Jurassic Park franchise.

Three years after the events of Jurassic World, the existence of Isla Nublar and its dino inhabitants are threatened by an imminent volcanic explosion. As the world debates whether to save the dinosaurs or not, Claire (Howard) is hired by Lockwood (James Cromwell), the estranged partner of the original JP founder John Hammond, and his right-hand man Mills (Rafe Spall) to save at least some species of dinos from the island. She drags her now ex-lover Owen (Chris Pratt) to the island with the promise of rescuing Blue, the sole surviving raptor from Jurassic World. On reaching the island, they manage to save a few dinos only to realise very late that a far more nefarious scheme is at play.

In spite of having the ever-loved dinosaurs, the Jurassic Park franchise always suffered from one huge flaw. The franchise peaked with the first movie, and none of the followups lived up to the brilliance of the 1993 film. Why, even Steven Spielberg tried and failed with its sequel The Lost World. That's why we keep hearing stuff, like the franchise has lost its magic or so.

Well, the makers of Fallen Kingdom know that they can't escape the trap too, so they decided to rattle things up. And in wanting to do so, they finally made the first steps of living up to the title and taking the dinosaurs out of the island, destroying the latter permanently. Secondly, they know the nostalgia factor was done to death in the previous movie, so they restrained their callbacks and delved into building the franchise ahead. Even the Jurassic Park theme music is used sparsely. Which, both works in the favour of Fallen Kingdom, and then not!

Fallen Kingdom has an advantage of having an enormously engaging and awesome first act. The opening scene is, perhaps, the best first scene in the entire franchise raising the stakes several notches higher. We are later made to understand that the island is in danger, leading to moral conundrum on whether to save the beasts out of their time from re-extinction or let Mother Nature be the mass-murderer once again. The debate is interesting, and we know which option is more preferable thanks to our favourite chaotician, the returning Ian Malcolm (Jeff Goldblum...needed him more than just two-bit scenes). Things get slow as we get to meet Claire and Owen again, but once they reach the island, the action picks up. The whole series of events in the deteriorating Isla Nublar are excellently directed and filled with some great thrills. And the conclusion to this act will leave you in tears.

The second and the third acts are comparatively underwhelming, having based in a more intimate setting. Things get darker here, as we get to know the new dino mutant, Indoraptor and the human meanies. Yet, there are some smart flourishes in these sequences. A scene-stealing Pachycephalosaurus provides some unexpected laughs, while the mystery surrounding Lockwood's granddaughter Maisie (an excellent Isabella Sermon) and some nail-biting sequences hold your attention.

JA Bayona (A Monster Calls, The Orphanage) also brings in some of his horror trademarks into Fallen Kingdom, smartly using light and shadows to create some eerie, terrifying scenes. His direction feels stronger compared to Colin Trevorrow (the director of Jurassic World). There is an excellent, claustrophobic one-take scene involving the leads and a sinking Gyrosphere that shows his talents in developing tension. If there are flaws with Fallen Kingdom, it has more to do with the writing (Colin Trevorrow, Derek Connolly).

Like with the movie's premise, it is the human characters who bring the movie down. Nearly every one of them is a caricature, including the leads. While Chris Pratt and Bryce Dallas Howard are easy to watch as the lead pair, their characters continue to be as one-dimensional as they were in the previous movie. Their arc as a broken-up couple is predictable as the villains' motivations. Speaking of the latter, we have three antagonists in Spall, Toby Jones and Ted Levine's characters, and yet none of them manages to get beyond being the snarling, paper-thin villains we are so used to in trashy blockbusters. Some of their actions are so silly and contrived that we wonder how they even rose up to their seats of authority. I also don't understand the new franchise's stupid obsession with trained raptors, like how Netflix's Marvel series is obsessed with the Hand. Please be done away with this angle!

Cromwell's Lockwood is a wasted opportunity. Justice Smith and Daniella Pineda are better, but they don't get much scope. BD Wong as the fallible scientist Dr Henry Wu has one purpose - to argue with one of the villains and later packed off for the future movie.

The dinosaurs definitely fair better, and leading the pack is Blue. If T-Rex was the MVP in the first Jurassic Park, Blue gets to be the hero here. T-Rex, in fact, gets a very short shrift, despite having a great intro. The main problem goes with the baddie of the dino pack, the newly created Indoraptor. It is definitely a very mean-looking reptile, but it lacks the character development of Indominus Rex. The climax where Indoraptor stalks the leads feel something straight out of an '80s serial killer movie. I also have to add here, that the trailers did spoil a lot of good scenes from the movie and that's unforgivable.

While I was a tad disappointed with the third act, at least Fallen Kingdom ends with a promise that the third movie may go up some epic levels. Even though it did remind me of Rise of the Planet of the Apes!

- All the other dinos, especially Mr Pachy!

Jurassic World: Fallen Kingdom is, in my humble opinion, the second-best directed Jurassic Park movie in the whole franchise. The first act is awesome and there are some nail-biting sequences throughout. The dark tones may not appeal to many, and the writing sucks at many portions. But it is still fun to see dinosaurs take down silly humans in various incorrigible ways!

(The above story first appeared on LatestLY on Jun 06, 2018 04:35 PM IST. For more news and updates on politics, world, sports, entertainment and lifestyle, log on to our website latestly.com).