Pinch us... as we can't believe that Snyder Cut's Justice League's first mini teaser is OUT. Yes, if you happen to be a DC fan, this news is probably the best thing on the internet today for you. 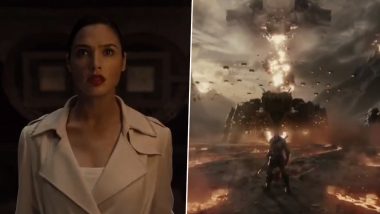 Pinch us... as we can't believe that Snyder Cut's Justice League's first mini teaser is OUT. Yes, if you happen to be a DC fan, then this news is probably the best thing on the internet today for you. As going by the glimpse of the brief look, we can't wait for the full-fledged film to drop soon. Calming ourselves down a bit, the video shows us Wonder Woman (Gal Gadot) who discovers something strange talking to her (mostly looks like Lex Luthor) before she meets the devil Darkseid all set to fight. The little peek-a-boo surely will make Justice League fans excited to the 't'. Justice League: Zack Snyder Shares First Terrifying Look of Darkseid From Snyder Cut That Will Release On HBO Max (View Pic).

'First ever sneak peek at JL. Get ready for more at DC FanDome,' wrote Zack Snyder on Twitter. Earlier, Darkseid's look was out and the same can be seen in the clip. Not to miss, how the makers have kept the Wonder Woman's look under wraps and we can see her in a blazer and not in her battlefield suit. Tagged as "an entirely new thing" Snyder Cut's JL version would make its way on HBO Max in 2021. #ReleaseTheSnyderCut: After Gal Gadot, Ben Affleck and Jason Momoa's Posts, DC Fanboys' Demand for Zack Snyder’s ‘Justice League’ From Warner Bros Just Got Stronger.

Check Out The First Look of JL Below:

"It will be an entirely new thing, and, especially talking to those who have seen the released movie, a new experience apart from that movie," Snyder had told to The Hollywood Reporter. Also reportedly, the movie is to be made on a whopping budget of $20 million to $30 million. Stay tuned!

(The above story first appeared on LatestLY on Jun 18, 2020 10:51 PM IST. For more news and updates on politics, world, sports, entertainment and lifestyle, log on to our website latestly.com).