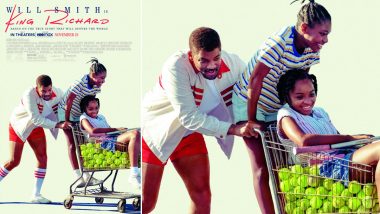 Will Smith is all set to make his big-screen return in the role of the ultra-ambitious and inspirational father to tennis legends Venus and Serena Williams in King Richard. The film will follow the journey of Richard Williams, "an undeterred father" with a "relentless drive and unapologetic vision to change the game" who is "instrumental in raising two of the most extraordinarily gifted athletes of all time," who will end up changing the sport of tennis forever. The film released in theatres today (November 19). But just a few hours after its release, the film has become a target of piracy. The film is now available for download on Torrent and other Telegram channels. King Richard New Trailer: Will Smith-Starrer Sees Beyonce’s ‘Be Alive’ Song Enhance Richard Williams’ Journey of Creating Tennis Legends.

King Richard full movie in HD is leaked on several torrent sites like Filmywap, Onlinemoviewatches, 123movies, 123movierulz, Filmyzilla and others pirated versions of King Richard movie in HD (300mb free download in 1080p, 720p, HD online) are available for the audience to watch.

In the film, King Richard, the two young tennis prodigies are played by Saniyya Sidney and Demi Singleton. The film also stars Aunjanue Ellis as Oracene 'Brandi' Williams, Tony Goldwyn as coach Paul Cohen and Jon Bernthal as coach Rick Macci.The film focuses on Richard's parenting efforts as he drives his daughters toward their destiny of becoming barrier-shattering pro tennis champs. 'King Richard' has been directed by Reinaldo Marcus Green. 31 days following its theatrical release, the film will be out on HBO Max as well.

(The above story first appeared on LatestLY on Nov 19, 2021 10:58 PM IST. For more news and updates on politics, world, sports, entertainment and lifestyle, log on to our website latestly.com).