Jessica Jones star Krysten Ritter celebrates her birthday on December 16 and as the actress turns 38, we look at some of her TV series roles that you may have gone unnoticed. 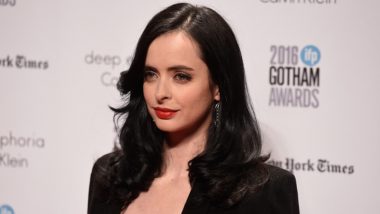 One of the best things about Krysten Ritter is that she can easily slip into any role. We have seen her pull off some amazing roles across genres and she's always a delight to watch. Ritter is one actress who made the protagonist's role look so good in movies that we often ended up liking her more. Remember how she played the sweetest bestie in Confessions of a Shopaholic to Isla Fisher's character. Oscars 2019: Krysten Ritter aka Jessica Jones Announces Her Pregnancy on the Red Carpet.

Of course, today, Ritter is better known for playing the lead role of Marvel's dark character, the mysterious Jessica Jones.  She was also a part of another popular series, Breaking Bad. As Ritter celebrates her birthday on December 16 and turns 38, we look at some of her other roles that may have gone unnoticed. Ritter has done smaller roles in TV series such as Gossip Girl and more. Here's looking at some of them.

Yes, we bet reading Gilmore Girls has got you thinking when was Ritter a part of it. Well, let's remind you of  Rory's (Alexis Bledel) Yale buddies. Remember when she meets Lucy, played by a chirpy Ritter. Lucy's character was sweet and sadly, the Gilmore girl doesn't treat her as nicely as one would expect.

Among Ritter fans, this series a favourite one. Krysten was absolutely amazing as heavy-drinking, proudly promiscuous, Chloe in this sitcom.  The series also starred  Eric André, Dreama Walker and James van der Beek.  The best part about this series was Ritter's hilarious performance.

We bet this has you confused. When did Ritter share frames with Blake Lively and Leighton Meester you ask? Well, she didn't, because Ritter starred in the episode where we are taken to the flashback of a younger Lily, Serena Van der Woodsen's mom. Ritter played her cool cousin Carol. She totally killed it with her style on this episode. El Camino: A Breaking Bad Movie: All the Major Breaking Bad Characters Who Return for the Spinoff Movie Starring Aaron Paul As Jesse Pinkman (SPOILER ALERT).

Ritter's other popular role was also in the TV series, Veronica Mars starring Kristen Bell but we have to say without a doubt that her best role till now when it comes to series, is Breaking Bad. Jane is arguably one of the most important characters to the story as Jesse's love interest. Well

(The above story first appeared on LatestLY on Dec 16, 2019 10:00 AM IST. For more news and updates on politics, world, sports, entertainment and lifestyle, log on to our website latestly.com).