Lady Gaga’s Missing Dogs Koji and Gustav Recovered, a Woman Arrives With the French Bulldogs at the LAPD

A woman found Gustav and Koji and she brought the two french dogs to the LAPD. Capt. Jonathan Tippett, commanding officer of the elite Robbery-Homicide Division confirmed the news and revealed that the woman dropped the two dogs at around 6 pm. 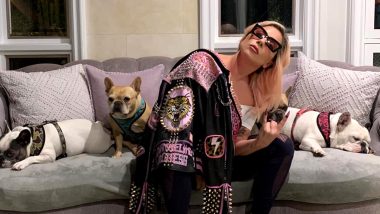 Lady Gaga received unfortunate news when she learned that two of her dogs were abducted in Hollywood while they had stepped out for a walk. Gaga's dogwalker Ryan Fischer was attacked by two men where they shot him in the chest and fleed with Koji and Gustav. Gaga's third dog, Miss Asia was able to escape and was returned safely to its owner. Lady Gaga has been worried since and was trying to find her dogs with the help of the LA police department. Finally, some good news has come her way. Lady Gaga Offers $500,000 Reward for Return of Her Stolen French Bulldogs Koji and Gustav After Dog-Walker Shot in Armed Robbery, Watch Video of the Horrific Attack.

A woman found Gustav and Koji and she brought the two french dogs to the LAPD. Capt. Jonathan Tippett, commanding officer of the elite Robbery-Homicide Division confirmed the news and revealed that the woman dropped the two dogs at LAPD’s Olympic Community Police Station at around 6 pm. He added that the woman who brought the dogs seems to be "uninvolved and unassociated" with the horrific incident. However, how did she secure the dogs wasn't immediately clear. Gaga's spokesperson and detectives involved in the case also confirmed that it was indeed Gaga's dog brought by the woman.

Gaga, who is currently shooting for her upcoming film Gucci in Rome was worried sick about her dogs. She took to Instagram and said, "My beloved dogs Koji and Gustav were taken in Hollywood two nights ago. My heart is sick and I am praying my family will be whole again with an act of kindness. I will pay $500,000 for their safe return. Email KojiandGustav@gmail.com to contact us. Or, if you bought or found them unknowingly, the reward is the same. I continue to love you, Ryan Fischer, you risked your life to fight for our family. You’re forever a hero." Lady Gaga Has No Idea What Fortnite Is! Twitter Explodes with Funny Memes and Jokes That Are Going Viral.

The singer has been in continuous touch with Ryan's family and has been taking updates about his health. According to Ryan's family statement given to Rolling Stone, Ryan is anticipated to make full recovery soon and is doing fine currently. They also acknowledged Gaga's efforts to keep in touch and said that she "has shown nothing but non-stop love and concern for Ryan and our family right from the outset." We are glad Gaga found her dogs and the dogwalker is doing fine as well.

(The above story first appeared on LatestLY on Feb 27, 2021 01:58 PM IST. For more news and updates on politics, world, sports, entertainment and lifestyle, log on to our website latestly.com).