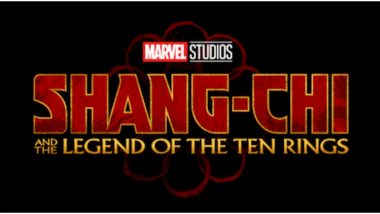 Shang-Chi and the Legend of the Ten Rings Poster (Photo Credits: Instagram)

Things are coming back on track in certain countries. After fighting a pandemic in COVID-19, countries like New Zealand and Australia are taking baby steps to return to normalcy and allow film shootings to resume their productions. After Disney's Avatar earlier started filming in New Zealand, the studio is now planning to resume working on Shang-Chi and the Legend of the Ten Rings. The upcoming superhero adventure will mark Marvel's first attempt in introducing an Asian superhero and the excitement for which is at an all-time high.

According to new reports in Deadline, the shooting is expected to commence from July end in Australia. The filming had earlier started in February 2020 but after director, Destin Daniel Cretton decided to self-isolate himself and take up a COVID-19 test, the shooting was pushed till March. While his test came in negative, the scenario had already gotten worsened in the country and Marvel decided to shut it indefinitely. Now with all safety precautions in place, the cast and crew who will travel to Australia will be asked to quarantine upon their arrival as per country's guidelines. Accommodations for those in quarantine are identified by the government.

Shang-Chi stars Simu Liu, Awkwafina and Tony Leung who will play Mandarin, the movie's prime antagonist. The name Mandarin was first introduced in Robert Downey Jr's Iron Man 3. While that was more of a mention and the makers didn't really highlight his character, Shang-Chi would see him as the main adversary. The film's slated to release on May 7, 2021.

(The above story first appeared on LatestLY on Jul 02, 2020 09:29 AM IST. For more news and updates on politics, world, sports, entertainment and lifestyle, log on to our website latestly.com).