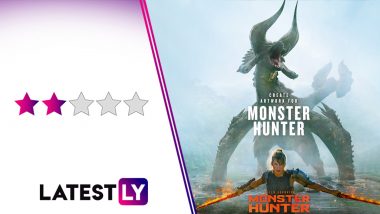 Monster Hunter Movie Review: After making a  movie franchise out of Resident Evil, that has nothing to do much with the videogame, director Paul WS Anderson has now trained his eyes on another fan-favourite RPG fantasy game, Monster Hunter. Once again casting his wife, actress Milla Jovovich, in the lead (who says Hollywood isn't bereft of nepotism?), this time Anderson has her battle some very ugly, and utterly non-terrifying monsters, with Tony Jaa for company. Well, you want a lot of monster action... you have it here. You want a good videogame adaptation... come again, another time! Monster Hunter: Milla Jovovich, Tony Jaa’s Action Film Is Hitting Indian Screens in 3D on February 5.

So Jovovich plays a US Army captain Natalie Artemis who gets somehow transported through a portal into a 'monster world', along with her team. The team, of course, means characters played by well-known actors like Meagan Good, Clifford 'TI' Harris, Jr, Josh Helman et al, who get butchered within half an hour of the movie, leaving Artemis to team up with Hunter (Tony Jaa) to survive the place and return to her world.

Monster Hunter: World is one of my favourite games, its biggest attraction being the strangest monsters found in some of the most gorgeous settings that graphics can offer. Anderson's Monster Hunter has quite a few monsters but they don't bring the kind of persona that their videogame counterparts possessed. Still, they are the most redeemable part of Monster Hunter, that takes a huge beating in boredom when these gigantic cretins aren't around.

You can't deny that there was scope, scale and ambition in Anderson's adaptation. The visual effects are decent enough, and the camerawork is quite splendid for a big B-movie like this, especially the way it sweeps over the endless sandy wasteland of the Monster World.

But you also cannot deny that Monster Hunter lacks a soul, thus turning it into a humdrum spectacle of seeing Jovovich destroy one beast after another, while wondering when she will get out of this endless cycle that began with Resident Evil 1. As for Tony Jaa, the martial artist is never allowed to impress thanks to the multiple editing cuts that ruin some of his action scenes, while his expressions scream 'Why did I ever come to Hollywood?'. There is also Ron Perlman, looking a bit like Donald Trump if the latter was stuck in wilderness for a week. Monster Hunter Director Showed Rough Cuts to Animators of Original Video Game to Make Creatures Accurate on Screen.

None of the characters, including the leads, make you want to root for them, and instead the monsters end up taking our cheers. A bit of that blame also falls for some very stilted dialogues that the poor actors are made to mouth, thinking of them as some brilliant one-liners. Which makes me wonder why, after 1993's Jurassic Park, have we never had a monster movie that does justice to its human characters?

- The Monsters and The Scale

Monster Hunter continues Hollywood's age-old tradition of not making a decent enough video-game adaptation. Skip this one, geeks, and get back to your PS4's and PS5's, you might get better satisfaction there. Monster Hunter has released in theatres in India on February 5.

(The above story first appeared on LatestLY on Feb 05, 2021 09:31 PM IST. For more news and updates on politics, world, sports, entertainment and lifestyle, log on to our website latestly.com).