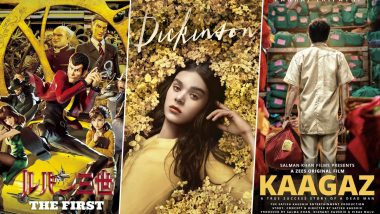 The first week of the new year started off with a bang. We got to see many amazing shows and films including Arjun Rampal, Manav Kaul's intense courtroom drama Nail Polish, Shilpa Shinde's period show Paurashpur entertain the audience throughout the first week of 2021. Other releases of the week including Transformers Earth Rise, Asphalt Burning, Cops and Robbers, Chilling Adventure of Sabrina Season 4, Monarca Season 2 and more also ruled the internet last week. Maara Trailer: R Madhavan and Shraddha Srinath’s Romantic Drama, Remake Of Malayalam Film Charlie, Will Make You Believe In Fairytales.

With another week of 2021 kicking in, filmmakers are all set to entertain you with new show and series. From manga series, Lupin's third season releasing on January 8th to Pankaj Tripathi's film Kaagaz, which is an Indian biographical drama written and directed by Satish Kaushik releasing on January 7th, this week sure looks promising when it comes to good online content. Hailee Steinfeld’s fans can also rejoice as Dickinson Season 2 is all to premiere this week as well. Not only fictional features but a few documentaries like Inside the World's Toughest Prison have been in talks since its announcement and the viewers can now finally see these feature films, shows and documentaries this week. Kaagaz Trailer: Pankaj Tripathi Depicts The Woes of A Common Man Declared Dead on Paper In This Salman Khan Production.

(The above story first appeared on LatestLY on Jan 04, 2021 05:32 PM IST. For more news and updates on politics, world, sports, entertainment and lifestyle, log on to our website latestly.com).