Scenes from the 1988 war film, Rambo III starring Sylvester Stallone are going viral on the internet after the Taliban crisis as it has an Afghanistan reference in it. Watch videos. 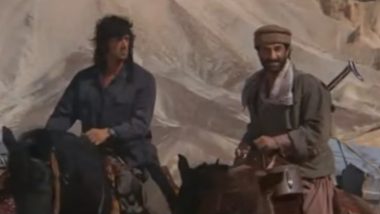 The situation in Afghanistan is getting worse with each passing day. As after the Taliban took over the capital city, Kabul, the internet has been flooded with videos and pictures of the country people in a plight never imagined. Right from the overcrowded Kabul airport where people are trying to escape from the chaos to pictures that'll bring tears to the eyes, Kabul is suffering. Amid this, an old scene from a Hollywood film titled Rambo III (1988) has gone viral on the web, for having Afghanistan in it. Fact Check: Did Sylvester Stallone’s Rambo III Dedicate Film to ‘Mujahideen Fighters of Afghanistan’? Know the Truth Behind This Claim Going Viral During the Taliban Crisis!

In particular, two scenes from the war movie are all over the internet. One, which is all about Colonel Sam Trautman (Richard Crenna), who was being held in a Soviet camp high in the Afghan mountains. And another one that shows Rambo and an Afghani in conversation. Sharing an anecdote, the man says, "Ancient people make a prayer about these people. It says: May God deliver us from the venom of the cobra, teeth of the tiger, and the vengeance of the Afghans."  Angelina Jolie Makes Her Instagram Debut, Shares ‘A Letter From an Afghan Girl’ As Her First Post.

Well, earlier to this, Rambo III was also a hot topic of discussion online for the last few days for allegedly being “dedicated to the brave Mujahideen fighters of Afghanistan." However, the claim does look inconclusive. Stay tuned!

(The above story first appeared on LatestLY on Aug 23, 2021 02:15 PM IST. For more news and updates on politics, world, sports, entertainment and lifestyle, log on to our website latestly.com).