Fact Check: Did Sylvester Stallone’s Rambo III Dedicate Film to ‘Mujahideen Fighters of Afghanistan’? Know the Truth Behind This Claim Going Viral During the Taliban Crisis!

Directed by Peter MacDonald as part of the Rambo franchise and starring Sylvester Stallone in the lead, Rambo III was based on the Soviet-Afghan war in the '80s, although it followed a fictional narrative revolving around the former mercenary John Rambo. 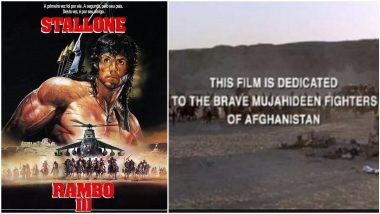 Poster of Rambo III; The Alleged Ending of the film (photo Credit: Twitter)

The world is shocked by the Taliban re-capturing Afghanistan and the US Army's hasty exit from the country. In these times, on social media, a picture is going viral claiming to be a still from the 1988 film Rambo III. Directed by Peter MacDonald as part of the Rambo franchise and starring Sylvester Stallone in the lead, Rambo III was based on the Soviet-Afghan war in the '80s, although it followed a fictional narrative revolving around the former mercenary John Rambo. Rambo Remake: Prabhas to Replace Tiger Shroff in the Siddharth Anand Directorial?

The still in question has gained momentum on social media, as it shows the film dedicating itself to the 'Brave Mujahideen Fighters of Afghanistan'. The plot of Rambo III has Sylvester Stallone's hero going to Afghanistan to help out the Mujahideen to fight against the Soviet army, the latter portrayed as villains here. The premise is inspired by the allegations that CIA had been funding and training the Mujahideen to topple Soviet Union in the '80s.

But if you go on to watch Rambo III after reading this, you would not find the below message towards the end of the film.

Reminder: The 1988 film Rambo III was dedicated to the "brave" Mujahideen fighters of Afghanistan, who were being funded by the US at the time. pic.twitter.com/LwPhmJdomY

If you check the ending of the film, you would see the dedication message to saying 'Dedicated to the gallant people of Afghanistan'.

So what happened here? The truth is, well, a little complicated.

The alleged original ending of Rambo III had gained notoriety as an urban myth, because apart from the above viral still, there is no videographic proof of its existence. Several viewers, in various blogs and social commentaries, mention seeing it, but there is no substantial evidence to back it.

A book called Fictions of War mentions this urban myth, claiming that the ending message has been changed post 9/11.

There are other theories that the ending message was different in the copies sold to different countries during Rambo III's release, though again, there is no videographic proof to back this.

This below video has the YouTube user buy several VHS copies of Rambo III and see what's the ending message in each. While the user observes that the footage length of the climax is different, due to trimming of some scenes, the message remains the same of dedicating the film to the gallant people of Afghanistan. As of where the allegedly fabricated image came from, no one has any clue. Kabul Airport Chaos: 2 People Fall From Aircraft That Took Off From Hamid Karzai Airport Amid Chaos in Afghanistan.

So it is hard to believe that Rambo III ever had a dedication message to Mujahideen, which also goes against the character of John Rambo, as he is someone who is embittered by the frequent wars. In Rambo III, he ends up in Afghanistan only to save a friend and leaves the place once that is done, even if the Mujahideen is shown in a positive light (a huge criticism it got when Rambo III opened in theatres).

Interestingly, Rambo III did have a different ending, where the hero stays in Afghanistan after rescue to help Mujahideen to fight Soviet forces. This would have definitely put the film in hot water, as many of the Mujahideen members went on to join Taliban and Al-Qaeda who were accused of 9/11 attacks.

Rambo III had an original ending claiming to dedicate the film to Mujahideen.

The Claim that Rambo III has an ending dedicating to Mujahideen is inconclusive.

(The above story first appeared on LatestLY on Aug 16, 2021 06:11 PM IST. For more news and updates on politics, world, sports, entertainment and lifestyle, log on to our website latestly.com).