Russell Crowe Birthday Special: 5 Best Movies Of the Actor that Celebrate His Talent

If given a choice, we'd pick these five releases of Russell Crowe for our movie marathon. Yes, the list will always include Gladiator. To see other names keep reading below. 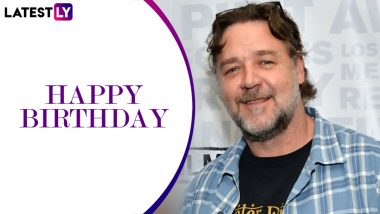 Academy Award-winning actor, Russell Crowe celebrates his birthday on April 7. An actor par excellence, he has always managed to intrigue us with his choice of roles. From playing a Gladiator to a cop and also a common man who's determined to get his wife out of jail, Crowe has managed to pull off some of the most complex roles in his career. A treat for any director, he has always been an actor who listens and performs. Seeing him on the big screen is always delightful and on the occasion of his birthday, we'd like to plan a marathon of all his movies. Russell Crowe's New Avatar Stuns Internet; Actor is Almost Unrecognizable (View Pics).

If given a choice, we'd pick these five releases of Crowe for our movie marathon. Yes, the list will always include Gladiator. To see other names, keep scrolling below. Russell Crowe Destroys a Troll Who Criticised Peter Weirs’ ‘Master and Commander’, Says ‘That’s the Problem with Kids These Days, No Focus’.

The Next Three Days

Even before Naseeruddin Shah elaborated on the powers of a common man (A Wednesday), Russel Crowe had effectively proven the same. In The Next Three Days, he plays a common man whose life becomes a mess when his wife gets arrested. Determined to get her out of jail, he decides to attempt a prison break. Now how does he manage that is something you need to watch in the movie.

A crime-comedy, The Nice Guys sees Crowe pairing up with Ryan Gosling to solve a murder mystery. He's a hired muscle while Gosling plays a detective and that makes for a very conventional combination. Together, the duo sets out on a mission to solve the case while giving us a very messy and goofy premise.

Crowe as a hot-tempered, no-nonsense cop sets out to investigate another murder mystery in this one. However, this time, he's joined by two other police officers who have different ways and approach to solve the case. Crowe in here is brutal and he packs a solid punch with his performance.

Another beautiful portrayal by Crowe where he played a mathematician battling schizophrenia who is hired as a cryptographer by a government. The movie was based on a real-life mathematician whose 'beautiful' mind was slowly getting disassociated from reality.

And finally Crowe's Academy Award-winning role, Gladiator saw him as a brave Roman soldier whose new master betrays him and sells him to slavery. He's now required to fight as a gladiator and soon becomes a master in that. A Ridley Scott directorial, the film was simply brilliant in all the departments and Russell Crowe was a delight to watch in all the scenes.

A very happy birthday to this amazing artist and also a performer!

(The above story first appeared on LatestLY on Apr 07, 2021 09:00 AM IST. For more news and updates on politics, world, sports, entertainment and lifestyle, log on to our website latestly.com).