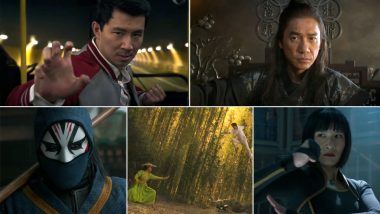 Shang-Chi and the Legend of the Ten Rings Teaser (Photo Credits: YouTube)

With the early reactions we got confirmation that Ben Kingsley was officially returning to his role of Trevor Slattery from Iron Man 3. What his role might be in the movie isn’t known yet, but its sure to make for a fun appearance.

Shang-Chi and the Legend of the Ten Rings earns the title of the best superhero film of 2021 so far. The action scenes are simply spectacular, especially the train & skyscraper scene. Best martial arts I’ve seen in a long time. Simu Liu & Awkwafina are terrific. #ShangChi pic.twitter.com/M0EEMJqKu3

There is a lot of praise being aimed towards the action of Shang-Chi too, with some claiming it to be the best since Captain America: The Winter Soldier. The standouts over here being a battle that takes place on a skyscraper and a train, both were heavily teased in the trailers so it’s great to see it being a standout.

There are nits to be picked, but #ShangChi is a terrifically entertaining piece of blockbuster filmmaking. It's much better than the trailers (lots of goodies unspoiled) and is unafraid to be weird and fantastical. It is exactly the shot in the arm that Marvel and Disney needed. pic.twitter.com/b2VcSEKidU

Many are calling Shang-Chi a very fresh and unique take on the superhero genre. This makes me really excited because it will be fun to see the Wuxia aesthetic being combined with comic book films.

Mandarin is One of The Best MCU Villains

Just watched #ShangChi at the world premiere, and wow, I was completely wrong about this film. Simu Liu is extremely charismatic as our main hero, and The Mandarin is one of the best MCU villains. The fight scenes are the best parts about it tho. Can’t wait for more of this hero! pic.twitter.com/R34ujqvmKu

It will finally be great to see Mandarin be done right on the screen. After the fake out in Iron Man 3 which left many fans disappointed, this will be exciting for them.

1 of them in particular will blow your mind and get you so much more excited for the future of the MCU.

Shang-Chi will feature two post-credits scenes. One of them is described as exciting and mind blowing and will make you look forwards towards the future of MCU.

(The above story first appeared on LatestLY on Aug 18, 2021 07:32 PM IST. For more news and updates on politics, world, sports, entertainment and lifestyle, log on to our website latestly.com).