Spider-Man: Into the Spider-Verse: Christopher Miller Reveals Why Sony Denied The Cameos of Tobey Maguire, Andrew Garfield and Tom Holland

On the other hand, the producer has confirmed that Spider-Verse's sequel will be October, 2022. 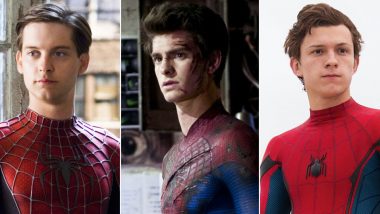 The spider-man fans might just have missed out on the biggest opportunity to watch all the Spider-mans together on screen! The superhero character has been played by Tobey Maguire, Andrew Garfield and Tom Holland in different films. All three have a separate fan base of different generations. However, the fans rooted for them to share the screen space and that almost happened, but alas! Spider-Man: Into the Spider-Verse was supposed to have this starry cameo but did not. Producer Christopher Miller tells fans why. Charlie Cox Reacts to his Daredevil Being a Part of Tom Holland's Spider-Man 3 and His Answer May Disappoint You.

In his recent revelation, Christopher answered the much pending question. A fan had asked him, "Any chance you and/or @philiplord can tell us anything about the cameo Tom Holland was supposed to make at one point? And was it just him or were the others considered/planned too??"

On this, the filmmaker genuinely answered, "We pitched the Sony brass an ambitious tag involving Spider-Ham, Tobey, Andrew, and Tom. They felt it was “too soon." Check out these tweets below.

We pitched the Sony brass an ambitious tag involving Spider-Ham, Tobey, Andrew, and Tom. They felt it was “too soon”#SpiderVerse #QuarantineWatchParty https://t.co/E91H1eLysr

However, the fans should not be heartbroken as they just thought that it was 'too soon.' They did not say that it was 'impossible', right?  On the other hand, the producer has confirmed that Spider-Verse's sequel will be October, 2022. All the fans have to hope now is a cameo in sequel at least and of course, for the pandemic to get over for new films to roll!

(The above story first appeared on LatestLY on May 07, 2020 04:48 PM IST. For more news and updates on politics, world, sports, entertainment and lifestyle, log on to our website latestly.com).