Tanya was unable to recover in the hospital and while she was not ill in the days leading up to her death, the actress' cause of death is still not known. The actress's longtime friend and representative Mike Pingel confirmed her death. 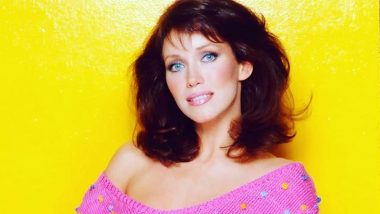 Tanya Roberts who ruled several hearts for her amazing acting as the Bond girl opposite Roger Moore’s 007 in A View to a Kill and as Midge Pinciotti on That '70's Show has passed away at the age of 65. She breathed her last on Sunday (January 3) after struggling for her health in the hospital for over a week. TMZ informed that the actor had taken her dogs for a walk on Christmas Eve when she collapsed upon returning home. She was immediately hospitalised at Cedar-Sinar Hospital in Los Angeles and put on a ventilator. Wonder Woman 1984 Star Gal Gadot Asks New Year 2021 to Be Good to World.

Tanya was unable to recover in the hospital and while she was not ill in the days leading up to her death, the actress' cause of death is still not known. The actress's longtime friend and representative Mike Pingel confirmed her death and revealed that it was not COVID-19 related. He told a news agency, "I'm devastated. She was brilliant and beautiful and I feel like a light has been taken away. To say she was an angel would be at the top of the list. She was the sweetest person you'd ever meet and had a huge heart. She loved her fans, and I don't think she realized how much she meant to them."

Tanya Roberts, born as Victoria Leigh Blum, kickstarted her career with modelling. She then started appearing in television advertisements and finally turned to acting in 1975. She was first seen in the horror movie Forced Entry. She got a lot of recognition when she replaced actor Shelley Hack in the fifth season of the detective show Charlie's Angels back in 1980. She essayed the role of Julie Rogers, a streetwise fighter who used her fists more than her gun on the ABC series. Kristen Bell Pens Heartwarming Birthday Wish for Husband Dax Shepard, Praises His 'Commitment to Growth'.

She was a part of films like the comedy film titled Racquet and the fantasy epic, The Beastmaster. She landed her most memorable role when she got cast in the 1985 James Bond film A View to a Kill. The film, which was Roger Moore's last outing as Agent 007 James Bond, saw Roberts play Stacey Sutton, an American geologist who becomes a target of villain Max Zorin (Christopher Walken). From 1998 to 2004, Roberts also essayed the role of Midge Pinciotti, the lovable but dim-witted mother of the red-haired tomboy Donna Pinciotti (Laura Prepon) on the television sitcom That '70s Show.

(The above story first appeared on LatestLY on Jan 04, 2021 07:15 PM IST. For more news and updates on politics, world, sports, entertainment and lifestyle, log on to our website latestly.com).