The Godfather Coda: The Death of Michael Corleone will release exclusively on Blu-ray and Digital on December 8, and also in select theatres from December 4. 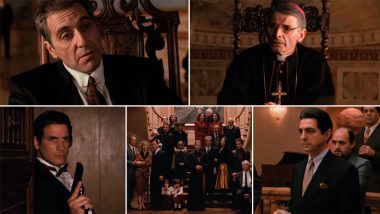 The Godfather Coda: The Death of Michael Corleone Trailer is Out! (Photo Credit: YouTube)

The Godfather and its sequel, The Godfather Part II are considered not just two of the greatest films in the gangster genre, but also in cinema in general. Directed by Francis Ford Coppola, these two films are still revered by movie buffs even after four decades. The Godfather Part III, that came 16 years after Part II, in 1990, is considered as the weakest in the trilogy, however. While still not a bad film, the biggest setback for the threequel is that it doesn't meet the high benchmarks set by its predecessors, despite terrific turns from Al Pacino and Andy Garcia. Al Pacino Birthday Special: 10 Underrated Movies of The Godfather Actor That You Should Definitely Catch Up!

It looks like the film we got back in 1990 was not exactly the vision that the director want to present to us. Like with Zack Snyder's Justice League Snyder Cut, Coppola is now bringing what is claimed to be the final and definitive cut of The Godfather Part III. This coincides with the 30th anniversary of the film's release. The Godfather Part III: Francis Ford Coppola Film's Edited Version to Release in Theatres by December.

Going with a title that has a SPOILER in it, The Godfather Coda: The Death of Michael Corleone features new scenes, additional musical cues and a new beginning and endings. These scenes are supposed to change our (flawed) perception of the film, so we are really excited to know how Coppola could pull this off. Or well, at least, it is cool to hear Pacino say, "Just when I thought I was out, they pull me back in."Marlon Brando Birth Anniversary Special: 10 Movie Quotes of The Godfather Actor That Are Simply Power-Packed.

It is a little whimsical to see that the film's female lead, Michael Corleone's daughter Mary, played by Coppola's daughter Sofia, is not given much prominence in the trailer. While an acclaimed filmmaker now, Sofia Coppola made her acting debut in The Godfather Part III. Her acting was, however, criticised heavily, with critics saying it brought the film down, while the director faces accusations of nepotism. This ain't Bollywood, you know! Ananya Panday Thinks the Godfather Is ‘Over-Rated’ and the Reason to Do So Will Make You Bang Your Heads in Frustration!

The Godfather Coda: The Death of Michael Corleone will release exclusively on Blu-ray and Digital on December 8, and also in select theatres from December 4.

(The above story first appeared on LatestLY on Nov 18, 2020 01:04 PM IST. For more news and updates on politics, world, sports, entertainment and lifestyle, log on to our website latestly.com).