Ananya Panday Thinks the Godfather Is ‘Over-Rated’ and the Reason to Do So Will Make You Bang Your Heads in Frustration! Watch Video

The 1972 film, directed by Francis Ford Coppola, is based on the best-selling novel by Mario Puzo by the same name. Centred around an Italian mob family in New York, The Godfather stars Marlon Brando, Al Pacino, James Caan, Robert Duvall and Diane Keaton. 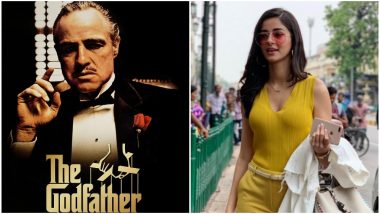 Ask any Hollywood fan as to which is their favourite Gangster movie, and there is a nine out of ten chance that the answer would be The Godfather. The 1972 film, directed by Francis Ford Coppola, is based on the best-selling novel by Mario Puzo by the same name. Centred around an Italian mob family in New York, The Godfather stars Marlon Brando, Al Pacino, James Caan, Robert Duvall and Diane Keaton. Many consider The Godfather as one of the best movies made in Hollywood, also winning five Academy Awards, including Best Director, Best Picture and Best Actor (Marlon Brando). The sequel, The Godfather Part II, won even more acclaim when it came out in 1974. Al Pacino Birthday Special: 10 Movie Dialogues of the Legend That Never Cease to Be Utterly Quotable!

But for the young Ananya Panday, the daughter of actor Chunky Panday, The Godfather is not impressive enough. The actress, who had made her debut opposite Tiger Shroff in Student of the Year 2, thinks the film is highly overrated! This revelation was made during a fun interaction with website PINKVILLA.

Now it is okay for Ananya to think The Godfather is overrated, considering that different people can have different opinions about a film, no matter how big a masterpiece it is. Like Orson Welles' Citizen Kane is considered as one of the finest films made in cinema, but it was trolled for being boring in an episode of FRIENDS.

But Ananya's reason for calling The Godfather overrated has nothing to do with her not liking the film. She hasn't even watched the movie, and that's what makes it overrated! Ananya Panday Speaks about Her Awareness Initiative regarding Social Media Bullying.

Ananya Pandey says The Godfather is an overrated film.

Well, as expected, The Godfather fans are not very cool about this, and they took to Twitter to troll the actress.

Ananya Pandey thinks Godfather is overrated because she hasn't seen the film.

I think Chunky Pandey is overrated, because I haven't seen him act.

There Has To Be One Sacred Games Meme!

Ananya Pandey : Godfather is the most overrated movie

Did Karan Johar Expect To Be Dragged Here?

Ananya Panday said The Godfather is the most overrated film in some interview.

"Banging Our Heads in Frustration"

Interviewer: What film do you think is overrated?

Ananya Pandey: The Godfather, because I haven't seen it, so. pic.twitter.com/pyCxPs5dbO

(The above story first appeared on LatestLY on Aug 16, 2019 08:35 PM IST. For more news and updates on politics, world, sports, entertainment and lifestyle, log on to our website latestly.com).

Comments
Tags:
Ananya Panday Chunky Pandey Karan Johar Student Of The Year 2 The Godfather The Godfather Saga
Comments
You might also like